When it’s a choice: Local or Organic?

By Tess Malijenovsky |  I am one of many Americans who subscribe to the belief that I vote with my dollar. And, well, I’ve been grappling with where to buy my food ever since college. How do you spend your dollar on food? Some of us do not have the luxury of such a choice, but the majority of us do. Sure, organic and local is the greenest, most health-conscious option. Here in Beaufort we have two natural health food stores: It’s Only Natural on Lady’s Island and Herban Marketplace in Uptown Beaufort.  However, Beaufort is also brimming with local non-organic farms and farmers markets. So, when straddling a decision between buying local or organic, which to do you opt for?

As broke sophomores in school my roommate and I bought our groceries together each week at Wal-Mart. “Well, if it’s not organic, might as well buy the cheapest,” we reasoned. We weren’t the only ones. But, after another year of social living in an academic climate

we were eventually turned on to green initiatives. Our roles as consumers in the economy, government and environment mattered. We stopped shopping at the corporate titan and began shopping at the local co-op, which is essentially an organic grocery store owned and controlled by its members.

Shopping organic is expensive, but I didn’t spend any extra money on groceries. I couldn’t afford to. Instead my habits as a consumer changed, choosing between eggs and milk rather than buying both. I felt great about the food I was putting into my body because I knew they were the freshest and greenest; that is, until I started volunteering on a small non-organic farm near Wilmington, NC.

When the real estate market crashed, this woman, Margaret, and her fiancé bought land to start an organic farm. But when her fiancé left her, and the farm too, Margaret had no choice but to learn about farming. She needed all the volunteers she could get, and us volunteers got free veggies in return. Even though Margaret didn’t use synthetic pesticide or fertilizer she couldn’t label her products as “certified organic.”

Becoming certified organic by the USDA is a cumbersome and lengthy process, often with pricey inspection fees that smaller farms can’t handle. As an example one regulation states: “A 3-year transition period is required for land used in organic production unless records prove that no prohibited substances were used in or near the production area during the previous 3 years.” I can only imagine that most farmers are more preoccupied growing their crop than keeping up with paperwork on their carrots.

One reason that shopping at farmers markets and produce stands should be encouraged is that obviously it supports the economic health of Beaufort and job security for our hardworking farmers. St. Helena Market has been open for 25 years (and if you go inside you

can see for yourself)! Not only will local produce definitely be the freshest, closest-to-the-vine produce; but, carting down the street at the farmers market is the surest way to create a relationship with the people growing your food. Ask them what sorts of pesticide and fertilizer that they use. You might be surprised at what you hear. For example, Otis Daise & Son produce from St. Helena doesn’t use any pesticides. And if pesticides are the principal reason you don’t spend the extra dollar on local produce, here’s some scientific facts that may put your chemical fears to rest.

It’s commonly thought by the public that pesticides in food and water cause cancer, but the World Cancer Research Fund (WCRF) claims “experts…have generally come to the view that residues are relatively unimportant factors.” The Environmental Protection Agency (EPA) found, “the overall risk was estimated to constitute between 0.5 percent and 1 percent of all cancer-related deaths or 3,000-6,000 annual deaths. The EPA acknowledges that this is a worse-case figure, and that the correct figure could be much lower and perhaps close to zero.”

The truth is that chemically there isn’t much of a basis for distinguishing natural and synthetic pesticides. For example, arsenic has been used as a weed-killer and is a naturally occurring mineral. Rather than “chemical contamination” causing cancer, WCRF states that “increasing the amount of fat, salt, low-fiber and meat-based food we eat increases our risk of getting cancer.”

Whether the EPA is corrupt or not, well, that’s a whole other argument. One professor of zoology and environmental toxicology at the University of Wisconsin, Madison, Dr. Porter believes the EPA underestimates the risks associated with pesticides and made the counter argument that the EPA assumes a “linear dose response” when a bell-shaped dose is more common in real life.

This brings me to the most convoluted factor when making a decision between local and organic: the carbon footprint. Non-organic produce may require less fossil fuel in terms of transportation; However, whether it’s local or not, the farms that are reliant on synthetic pesticides and fertilizers are dependent on vast amounts of fossil fuels and ultimately release large levels of carbon dioxide, creating the greenhouse gases harmful to the atmosphere. In general conventional farming practices leech nutrients from the soil, breaking it down over time.

Organic farming, on the other hand, absorbs carbon dioxide emissions from the air into the soil and builds nutrient potential year after year of farming. According to Tim LaSalle, CEO of Rodale Institute, which is an institute dedicated to researching and educating

farmers and consumers about sustainable agriculture: “Research at Rodale Institute that has now been replicated at several land grant universities, shows that over 3.5 tons of CO2 can be sequestered on well-managed organic soils using compost and no chemical inputs.” LaSalle claims that organic farming “is the single largest strategy for mitigating carbon dioxide” and that “nothing [is] more significant to [helping] us in our crisis with climate.”

There you have it! Herban Marketplace and It’s Only Natural are small shops with great organic options. Both stores make an effort to 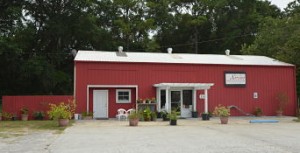 order local organic produce when possible, and you’re still supporting local businesses when shopping at these stores. It’s Only Natural also sells CSA or Community Supported Agriculture, which is more or less a weekly subscription to the freshest seasonal vegetables. Supporting CSA sends money to local farmers and your dollar will emphasize environmentally friendly food production. If you’ve never been to one before, Beaufort has three farmers markets to choose from:

• Downtown Beaufort: Wednesdays from 3 to 7 pm on West Street.

• Port Royal: Saturdays from 8:30am to 12:30pm at the Naval Heritage Park in front of Naval Hospital Beaufort. There is also live music from 9am to noon.