The only Confederate soldier interred in the Beaufort National Cemetery with a tombstone marked as unknown has been identified. Pvt. Haywood Treadwell of the 61st NC Volunteers, Co. G whose identity emerges after 150 years, will be recognized along with other Confederate soldiers on May 9th and 10th. The event will include a Friday evening symposium and a Saturday formal memorial ceremony with the unveiling of the new Treadwell gravestone.

During the Friday May 9th symposium, historians will trace the life of Private Treadwell, from his years as a turpentine farmer in Sampson County, NC, to his military service, his wounding and capture during the battle for Battery Wagner in Charleston Harbor, and ultimately to his death in Union Hospital No. 4 in Beaufort and burial on September 12, 1863.

The symposium will be held at the University of South Carolina Beaufort Performing Arts Center at 7:00PM. Beginning at 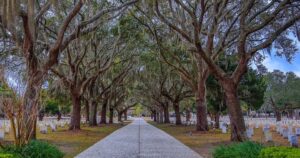 6:00PM, there will be a dry encampment of Confederate re-enactors, an informal talk on Civil War medical practices and a live band performing Civil War era music on the grounds of the Performing Arts Center.

Planned for May 10th is a formal Confederate memorial ceremony at the Beaufort National Cemetery. Beginning at 10:00 AM, it will include an honor guard of Confederate re-enactors, a cannon salute to Pvt. Treadwell and the other Confederate soldiers interred in the Cemetery and the unveiling of Pvt. Treadwell’s new gravestone by Treadwell descendants.

Chairing the symposium will be Dr. Lawrence S. Rowland, Professor Emeritus, the University of South Carolina Beaufort. Speakers will include Joel Rose, President of the Sampson County Historical Society; a military historian and Penelope Holme Parker whose research on the William Wigg Barnwell House (Union Hospital #4) in Beaufort, SC for its owners Conway G. and Diane Ivy, led to the discovery of Treadwell’s identity.

Co-sponsoring the event are the Historic Beaufort Foundation, the Richard H. Anderson Camp of the Sons of Confederate Veterans and the Stephen Elliott Chapter of the United Daughters of the Confederacy. 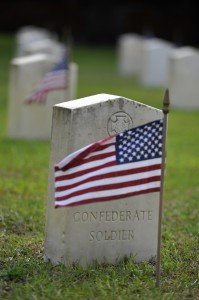