Over 300 people converged on The Shed in Port Royal on Saturday night to support four non-profit organizations at the 5th annual Beaufort Beauties pageant.  There was no shortage of glitz and glamor either as these guys knew how to put on a show. It’s easier to flaunt your stuff when it’s in good fun for so many of our deserving local charities and this year’s contestants didn’t hold back at all.

This year’s winner is…. Greg Rawles, aka Lulu LaRue. The first runner up is Joel Garrett, aka Anita Cocktail, and second runner up is Christopher Geier, aka ‘Guyly Cyrus’.

The contestants performed together at times and individually to wow the judges and the audience, with lots of style shining through in the talent portion of the evening. Jeff Feus took the Best Talent title this year, and Joel Garrett won the Evening Gown competition. This year’s Miss Congeniality Beaufort Beauty was Christopher Geier, a title bestowed on the contestant who raises the most money for charity.

The contestants also answered questions that were asked by a panel of judges during a Q & A session. This year’s panel of judges was comprised of Holly Jahn, Nan Sutton, Representative Shannon Erickson, Kevin Cuppia and Scott Dadson.

The money raised by the 2014 Beaufort Beauties fundraiser will benefit Dragon Boat Beaufort, Lowcountry Habitat for Humanity, the Healing Heroes of the Lowcountry Fund and Main Street Beaufort, USA.

Our hats off to the men who donated their time, effort, a little pride, and some facial/body hair for these fantastic local Beaufort causes. 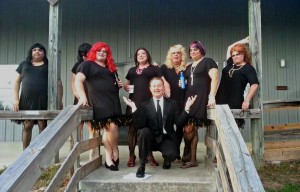