Fans line up as Candice Glover comes home to Beaufort

Candice Glover returned to Beaufort on Saturday to celebrate the release of her debut album, Music Speaks, with an album signing event at Walmart in Cross Creek Shopping Center. Fans lined up as early as 6:30 in the morning to get a spot in what turned out to be a long line of supporters of the local artist who captivated an entire area during a dramatic run toward being crowned 2013 American Idol winner last spring. 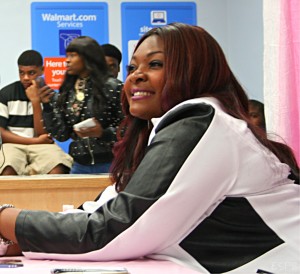 The St. Helena Island native was just as happy as the near 1000 fans that came to see her. Candice met with her supporters, young and old, and posed for many photos. Her proud family was in attendance including her mother and father, John and Carole and several of her siblings and friends.

“ We love Candice,” said local Dana Aiken. “It has been nice to see her journey come full circle.  My little girl couldn’t believe she was seeing Candice in real life.” 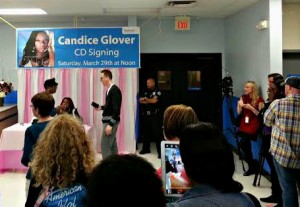 As was the thought of many who came early, not wanting to miss the chance.  When we [ESPB] arrived to take photos of the event it was around 11:20 and there were hundreds of fans in line already. “They started handing out wristbands at 8 am this morning,” said Aiken.  “We wanted to make sure we got one so we were here at 7:30. The very first people in line were here at 6:30.  What a long day but it was definitely worth it for the kids. It’s kind of crazy,” she said.

Crazy indeed. The staff at Walmart and security had things well in hand as two long lines were formed at the left and right sides of the ‘Site to Store’, formerly the Layaway department. Everyone got their chance to see her and many of Beaufort’s youngest ‘Candi Canes’ went home with a smile. And a new CD too.

Candice began her day at a VIP meet and greet at The Beaufort Arsenal in downtown where some 50 people came to see her. While there, she posed for photos with fans, signed some autographs and answered a few questions about her new and exciting life as a celebrity.

“It’s so surreal, when I come home to Beaufort to see so many people behind me 100 percent,” she said.

Welcome home Candice.  If only for a little while.  It sure was nice to see you.

For TONS more photos of Candice’s album signing event AND of her press conference at The Beaufort Arsenal visit our Photo Gallery, here. 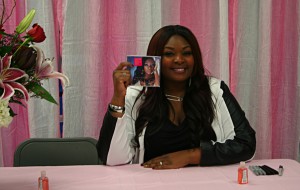 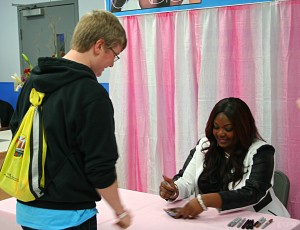 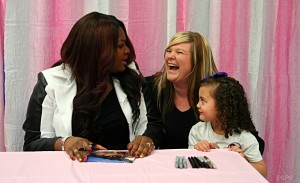