1635 On the Avenue adding taste to Port Royal

Port Royal is known for its casual atmosphere, friendly neighbors, block parties, a great school and a little strip of waterfront paradise known to locals as “The Sands”. This neighborhood is perfect for flip flops, sand between your toes and a little salty breeze through your hair.

It’s also good for one more thing; a finer dining experience on the town’s main street appropriately named 1635 On the Avenue.

Restaurant owner Lorett Hayes just couldn’t stay retired. She’s been a resident of the Palmetto State since she fell in love with a Carolina boy some 30 years ago. Beaufort has been a vacation spot but for 5 years now they have called Beaufort home.

She’s not new to owning restaurants and she didn’t come into the business through formal culinary training either. As she put it, “God gives us all a gift and some of us never discover it. I was lucky enough to find mine and it’s creating in the kitchen.”  After starting in the hotel industry in marketing, she dipped her toes into opening patio cafes in hotels. Then her husband convinced her to buy a building and create an old fashioned ice cream parlor.

1635 On the Avenue is Lorett’s 4th eatery, and she’s received some impressive accolades. Two of her restaurants in Pendleton, SC, Liberty Hall Inn and 1826 On the Green, have been featured in Southern Living.

Every chef is known for a signature dish, but Lorett says her signature is more of a genre.

She loves Cajun and creole because of its “soulful heritage” and likes to play with the flavors that the style of food lends itself to and she can’t imagine her kitchen without it. “Sometimes the combination I create is great and sometimes, not so much. But I love the process.”  Most importantly, Lorett says, “I won’t cook anything I won’t eat.”

Menu samplings show lots of taste at 1635 with hand made crab cakes served in a red pepper sauce; a (spicy) Bayou pasta with crab, crayfish, shrimp, garlic, mushroom in Cajun cream; and shrimp and grits along with many other delectable options.

Lorett loves the small town feel of Port Royal and the accessibility to people from Hilton Head to Fripp Island. She enjoys the small atmosphere because the business is more about the people than the food for her. She also enjoys entertaining and feeding people; and this location and size affords her the ability to walk around and talk to her patrons for candid real-time feedback from them and to know their stories.

If you ask her about her favorite place to eat when not working, it’s home. If she goes out, it’s to a local place where people know each other with a great atmosphere and small bites. 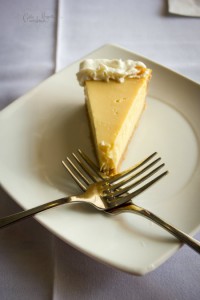 Lorett does have one limitation she graciously admits to. She doesn’t bake. She says she’s just not made for it. For desserts she partners with a small family owned company named Mike’s Pies. If you’ve tried the key lime pie at 1635, like I have, you know that whoever Mike is, he’s the real deal. (I wouldn’t turn down the salted caramel cheesecake again either.)

All dressings, sauces etc., are made from scratch in-house at 1635 and their soups are no exception. The potato and leek soup had just a touch of coriander and sherry, and a few other secrets she didn’t share, and it was incredible.

The restaurant’s menu will vary seasonally. with pumpkin and other flavors in the fall as well as springtime dishes with lighter fare and hearty foods for winter. The menu is posted on both their Facebook page and website.

The Port Royal area has lots of fantastic local restaurants, and 1635 On the Avenue is definitely one of them.