One local business is giving kids a place to hang out after school and serving them up a menu fit for a student’s budget. For the sixth year running, The Upper Crust on Lady’s Island has launched its Student Dollar Menu to coincide with the beginning of the new school year.

During each school week from 2pm through 5pm, local high school and middle school students with their school ID can stop into the restaurant and enjoy a dollar menu while hanging out with their friends. The menu boasts large pizza slices, baskets of fries, garlic bread, salads, IBC sodas, soft drinks and more; all for only a dollar each.

Owner Dave Blake came up with the idea back in 2012. Not only to bring more kids into the restaurant, but for other reasons as well.

“At the time, I was the father of two teenage girls who were both in school,” Blake said. “It’s about having a place for kids to go after school. A place where their parents feel comfortable with knowing where the kids are.”

“With many households comprised of two working parents these days, it’s often that our older children are in a routine of getting out of school at the end of the day and going home to an empty house while mom and dad finish out their afternoons at work. We’ve given them that spot,” Blake added.

Students have responded as well and the menu is well known by local kids.

“We get around 50 to 60 kids each week coming in after school to take advantage of the menu, and they stay awhile too,” said Jordan Pender, who works at the restaurant and is usually there in the afternoons. “They’re hanging with their friends, doing homework and just having fun being kids,” she added.

Pender added that the Cheerleading squad visited after school the previous week and the tables are typically full with players from the Beaufort High School football team during the football season. 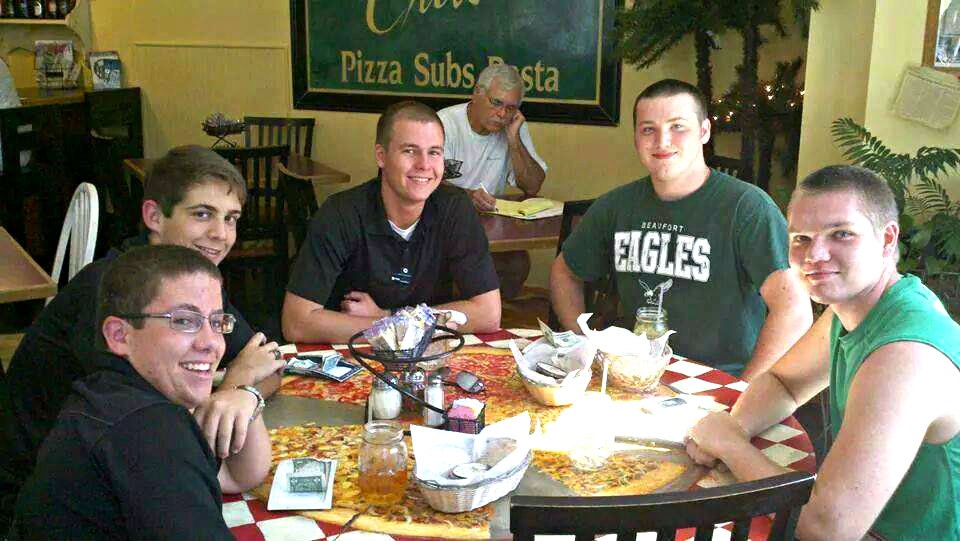 Blake told us that they run the menu from 2 to 5pm on a dine-in only basis. “We enjoy supporting our local schools, the students and the families,” Blake said. “Being in business for over 25 years, I’ve gotten to know a lot of them. Some have pulled me aside and thanked me for the student-friendliness of the restaurant.”

“That’s what makes us feel good.”

In addition to the Student Dollar Menu, the restaurant also offers an all-you-can-eat pizza & salad table with its express lunch every Tuesday and Thursday and a Facebook Fan Appreciation Day every Wednesday.

The Upper Crust is located in Hamilton Village across from the Huddle House on Sea Island Parkway on Lady’s Island.