Commodore Bill Damude and the folks at the Beaufort Water Festival have unveiled its theme and t-shirt design for the upcoming 60th installment of the 10 day summer party.  The ‘Southern Summer Bash’ hits Beaufort from July 17th through the 26th and it’s the diamond anniversary of the annual festival.

This year’s design was created by local artist Mary Thibault who also designed the 2013 edition.

Another announcement is expected next week letting everyone know who the big star will be at this year’s Concert in the Park, and the Event Schedule is available at http://bftwaterfestival.com/.

With a new theme and a different Commodore every year, the 10 day festival takes place like clockwork in mid-July at downtown Beaufort’s Henry C. Chambers Waterfront Park.  Amazing shows, dances, concerts, shagging, a teen dance, sporting, and many other events are enjoyed with over 400 dedicated volunteers banding together to bring the events to approximately 60,000 attendees who converge on Beaufort from all over the southeast, and the rest of the U.S.

We’ll see you there. 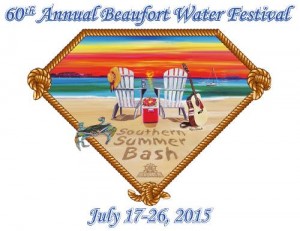