It’s here again. The 7th annual Beaufort International Film Festival is back and expecting a record turnout. There were nearly 200 entries in the festival this year of which 34 independent films and 10 screen plays have been chosen.  Ron Tucker, President of the Beaufort Film Society, said more than 7,000 people participated in last year’s festival and he expects an even greater turnout this year. “We will present more than thirty screenings to include shorts, documentaries, animated films and student productions and we look forward to hosting some exciting special guests and celebrities again this year. This may be our best festival yet.”

This year’s festivities kick off on Wednesday, February 13 , at the Opening Night Reception. This is the first year this has been open to the public as a ticketed event. The Reception will be held at Old Bay Marketplace. Vice President of Beaufort Film Society, Rebecca Tucker stated, “We are so blessed that this community has continued to embrace the festival each year. This year we have had over 100 volunteers helping us in many different capacities. We are so thankful for their tireless efforts.”

Mike Tollin, Director of the film, Radio, which was shot in the Lowcountry in 2003, will accept the Jean Ribaut Award for Excellence in Filmmaking. The real life “Radio,” James Robert Kennedy (played by Cuba Gooding Jr.), and Coach Harold Jones (played by Ed Harris), will also attend the festival. Tucker said an effort is underway to locate local people who worked on the set of the film as extras or technicians and invite them to the screening. Tollin said he is excited about seeing them again.

There will be a special reunion screening of the film at 7:30 pm on Feb 15 at the University of South Carolina, Beaufort, Center for the Arts.

Chris Brinker, producer and director of the soon-to-be-released motion picture, Whisky Bay, will conduct a Q and A on the making of the film along with the film’s star, Tom Berenger at 4:15 pm on Feb 15. Brinker will be presented the festival’s inaugural Robert Smalls Indie Vision Award.

The Awards Ceremony is Saturday, February 16 at USCB. Cocktail hour begins a 7 pm and the Ceremony follows at 8 pm. 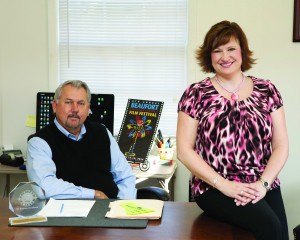