A chat with Geppetto from My Son Pinocchio, Jr

By Anna Schaffer | This weekend nearly sixty young actors will take to the stage at USCB Center for the Arts in a production that puts a twist on the traditional story of Pinocchio. The Beaufort Children’s Theater opens “My Son, Pinocchio, Jr.” on Friday after nearly three months of rehearsals and previews.

I had the pleasure to sit down with the father of that adorable little puppet for a few questions about this extraordinary local production.

Dan Brown, a veteran to the Beaufort Children’s Theater, and local theater as a whole, is a senior at Bluffton High School this year. Since moving to the Lowcountry as a sophomore, Dan has found a home in arts organizations both north and south of the Broad River.

His current role lands him in a special toyshop, as Geppetto, the creator of the famous puppet, turned into a “real boy,” Pinocchio.

When asked for a sneak peak of the plot, Dan described the show by explaining, “Its the classic story of Pinocchio. You’ll hear those classic Disney tunes, like When You Wish Upon a Star, and I’ve Got No Strings, but with those two catchy tunes you’ll also hear a music sampling from Broadway veteran Stephen Schwartz, composer of hits musicals including Wicked, Godspell & Children of Eden. New songs like, Empty Heart, will highlight the twist in this production, which allows for the story to be told with a shift from its traditional elements, coming from a different perspective and the introduction of more dynamic characters,” says Brown.

What does Dan hope the audience will take away from this production? Spoken with the wisdom of such a fatherly character, he hopes that you understand that “rigid archetypical standards cannot always be met, but that doesn’t demean the person failing to meet them.”

A lesson learned well by his character, as Geppetto always wants a child but doesn’t get his wish exactly as he expected. Instead, Geppetto learns to love his son, regardless of his imperfections. “He changes himself and his ideals of a perfect child to match what he discovers is already a child that he loves,” adds Brown.

More importantly, Dan hopes that everyone can, “realize the impact that the arts has on all of our lives and how doing a show can change a person’s life for the better.”

Show your support for the arts & enjoy this fantastic production this weekend. My Son Pinocchio, Jr. runs Friday & Saturday, at 7:00 pm & Sunday at 3:00 pm. Tickets may be purchased online at www.uscbcenterforthearts.com or call the box office 843-521-4145. Don’t miss your opportunity to see these local young artists! 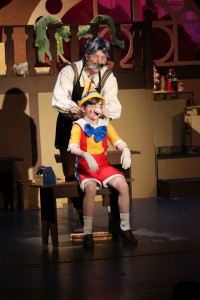