By Gail Westerfield | A Piece of My Heart is a play based on the true stories of women who served in Vietnam. It’s drawn from interviews with 26 women that were done in the 1980s, and the six main characters in the play are based on composites of those women. Three are nurses, one is an NCO Intelligence Officer, one is a Red Cross “Donut Dolly,” and one is a singer who tours with a USO shows. The show begins and ends with the dedication of the Vietnam War Memorial Wall, and in between, through monologues and scenes, we see how they were before, during, and after their experience of the war.

There are a lot of cool things in this play: a minimal set, lots of light and sound effects, great music – some of it live – and a cast of 11, ranging in ages from 19 to their 60s.

My favorite thing about the play is the characters, and getting to tell the story of these women whose role in the war was largely ignored because they 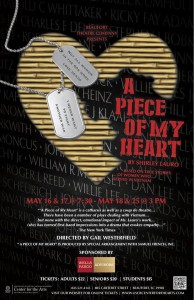 weren’t in combat, though they were in danger all the time in the capacities in which they served. And they had a horrible time when they came back, too, just like the male vets who survived the war.

I know a woman whose unit had 12 nurses and 9 of them had breast cancer, from Agent Orange disease, and the VA would do nothing because they wouldn’t acknowledge the disease existed. And the PTSD (which of course wasn’t yet called that then) was rampant and untreated. This play shows the after-effects of the war and the characters coming to terms with what they experienced. It is ultimately a positive story, based on the lives of truly unsung heroes who come to terms with what they experienced and go on to help others live full, happy lives, too.

We couldn’t be happier than to be doing it in a military town, and to honor ALL veterans with it, but also, it’s a fantastic piece of entertainment. It’s gut-wrenching sometimes, but it’s also funny and beautiful.

The more people I tell about this play, the more I find out how deeply connected people are to the Vietnam experience in one way or another. Two of the youngest members of our cast both had grandparents who served, for example, and parents, and husbands, and other family, and so many people have offered to give us advice, to lend us props, to consult on particulars of military behavior or the war, just to help in any way they can.

A portion of the ticket sales will be donated to the Vietnam Women’s Memorial Project http://www.vietnamwomensmemorial.org/vwmf.php and we’ll be inviting any interested groups to participate in the lobby before and after each show to tell about their work and how people can learn more or help.

The Center for the Arts is on the USCB campus, 801 Carteret Street in downtown Beaufort.  For more information and tickets, contact Bonnie Hargrove, producer, Center for the Arts, USCB at 843.521.4100 or email bhargrov@uscb.com. Or for questions about the play, contact Gail Westerfield, director, at 843.271.0593 or e.gail.w@gmail.com.

Here are some facts about women in Vietnam:

Approximately 11,000 American military women were stationed in Vietnam during the war. Close to ninety percent were nurses in the Army, Navy, and Air Force. Others served as physicians, physical therapists, personnel in the Medical Service Corps, air traffic controllers, communications specialists, intelligence officers, clerks and in other capacities in different branches of the armed services. Nearly all of them volunteered.

By 1967, most all military nurses who volunteered to go to Vietnam did so shortly after graduation. These women were the youngest group of medical personnel ever to serve in war time.

Because of the guerilla tactics of Vietnam, many women were in the midst of the conflict. There was no front, no such thing as “safe behind our lines.” Many were wounded; most spent time in bunkers during attacks.

Medical personnel dealt with extraordinary injuries inflicted by enemy weapons specifically designed to mutilate and maim. During massive casualty situations, nurses often worked around the clock, conducted triage, assisted with emergency tracheotomies and amputations, debrided wounds and inserted chest tubes so surgeons could get to the next critical patient. Over 58,000 soldiers died in Vietnam; 350,000 were wounded.

It is estimated that approximately 265,000 military women served their country during the Vietnam War all over the world in a variety of occupations.

An unknown number of civilian women also served in Vietnam as news correspondents and workers for the Red Cross, the USO, the American Friends Service Committee, Catholic Relief Services and other humanitarian organizations. Like their military counterparts, many of these women were wounded in the crossfire. More than 50 civilian American women died in Vietnam.

Many Vietnam women veterans have never told their friends, colleagues or even loved ones about their tour of duty in Vietnam. The majority of them were only in their early 20s when they returned to a country that did not understand what they had just experienced. Although most were there to save lives, they received the same hostile treatment as the returning combat soldiers.

Veterans groups and the government had few records of them – there were no networks established and no easy way to find out where these women were…there is still no official, accurate record of the number of women who served during the Vietnam era.

According to a recent Veterans Administration report, 48% of the women who served during the Vietnam conflict will suffer from some form of post-traumatic stress disorder (PTSD) during their lives. Yet, few have sought documented help for it. Many women also have suffered health problems associated with Agent Orange exposure. Some have committed suicide. 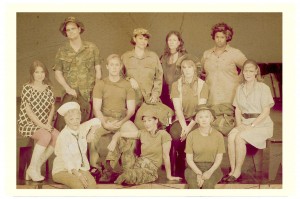