A Spring tour of Parris Island

It’s a whole other world behind these gates.  A vitally important part of today’s Beaufort, Marine Corps Recruit Depot Parris Island is responsible for training male recruits from east of the Mississippi River, and all female recruits enlisted in the Marine Corps nationwide.  The Depot is also headquarters for the Eastern Recruiting Region, which oversees recruiting in 28 states, Washington D.C., Puerto Rico, and the US Virgin Islands.  Recruits 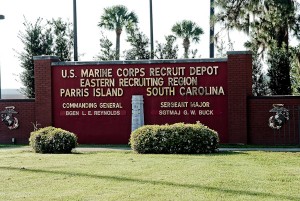 Parris Island is open to the public and accessible through the main gate with your driver’s license, vehicle registration and proof of insurance. Enjoy dining at Traditions or a round of golf at Legends and some amazing history too.

We were very happy to accept an invitation by MCCS to take a tour, joining over 100,000 people that visit Parris Island each year, and we spent an entire morning there.  With so much history, and we love Beaufort history, we were glad to get a little lost behind those gates, in that other world.

All things have a beginning, and Parris Island’s started in 1562 with a French Huguenot expedition, led by Jean Ribault, being the first European group to attempt to colonize Parris Island.  The French expedition built an outpost named Charlesfort, and Ribault left a small garrison behind there as he returned to France for colonists and supplies. After a long absence, Charlesfort was abandoned after the garrison mutinied.

They built a ship on the island, and sailed back to France in April 1563. This was the very first ship to have been built in America and used to sail east over the Atlantic.

In 1566 the Spanish, led by Pedro Menéndez de Avilés founded a settlement named Santa Elena which became the capital of La Florida for the next decade and was abandoned in 1587. England took control of the region by the 17th century, and Parris Island became home to British plantations after being purchased by Colonel Alexander Parris, treasurer of the South Carolina colony, in 1715. This turned out to be the very first European settlement in the New World, predating St. Augustine, Jamestown and the landing of the Pilgrims at Plymouth Rock.

Union forces captured Port Royal Sound in 1861, and Parris Island became a coaling station for the Navy.
After the Civil War a South Carolina legislative delegation worked to develop Port Royal Sound into a naval installation.  Former slave turned Congressman Robert Smalls was instrumental in helping establish and maintain a new federal military installation on the 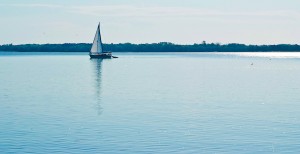 island.  In 1883 Parris Island became a naval coaling and supply station.  In 1889 the Naval Station opened, and two years later the Navy placed its primary south-Atlantic Naval Base at Port Royal, and Marines were first stationed on Parris Island in 1891 in the form of a small security detachment headed by First Sergeant Richard Donovan.  Donovan’s unit was highly commended for preserving life and property during hurricanes and tidal waves that swept over the island in 1891 and 1893.
In 1908, the navy yard moved to Charleston.

One of the first stops on our tour was the M0lly Marine statue in Memorial Park.  The park is dedicated to the Defense Battalions that trained there during WWII.  The statue is a replica of the famous Molly Marine statue, dedicated to the service of all women Marines.  The original was commissioned during WWII by a Women’s Reserve recruiter in New Orleans, Louisiana.  It’s sculptor, Enrique Alferez, was a Mexican immigrant who himself wished to become a Marine.

Going through part of Parris Island’s historic district we came to Quarters One, which is the tradional home of the Depot’s Commanding Officer, as we see the historic bell outside of the residence.  Then we turned our eyes to the Mascot Cemetery.  It’s the resting place of many of Parris Island’s traditional bulldog mascots and had it’s most recent burial just this past year.

We then made our way past both the historic Parris Island Dry Dock and the old boat landing.  The largest wooden dry dock every built in the US, for over ten years it served as the only naval dry dock on the east coast south of Norfolk, VA.  When in use, it was sealed off from the Beaufort River by means of a steel gate.  The gate was floated into place, then filled with water and allowed to sink.  The Parris Island boat landing was, at one time, one of the busiest spots on the island.  Until 1929, the island was only accessible by water,and a ferry provided all transportation to and from the Port Royal docks to the Recruit Depot docks.  In that year the causeway and a bridge over Archer’s Creek were completed, ending the water-transportation era.

After passing the Drill Instructor School at Crawford Hall we came to where the women train.  Parris Island is home to the 4th Recruit Training Battalion which trains female recruits.  Women began serving in the Marine Corps in 1918, organized into the Women’s Reserve.  In 1948 women were integrated into the regular Corps, and in 1949 the first class graduated at Parris Island.  Training for women closely parallels that of men on Parris Island.

Passing the area where zeppelins (blimps) once stood in the 1920’s and 30’s, we then stopped at Traditions.  Traditions is a fine dining restaurant at Parris Island, which not only proudly serves Marines, Sailors, civilian employees and their guests, in fact it is open to the public too.  The restaurant’s historic building, constructed in the early 1900’s, provides beautiful marsh views and even the most discerning of palates will be satisfied by Traditions’ wide variety of menu options and is open for lunch Monday through Friday.

Moving on, we passed old Page Field.  A former Marine Corps Air Station constructed in 1934 and used through WWII, Page Field saw a variety of aircraft in its day from Navy dirigibles, to Wildcats and B-25 bombers.  It is now used as part of the Weapons and Field Training Battalion, and the site for Basic Warrior Training and the Crucible.

Coming into Legends, Parris Island’s 18 hole golf course, it sure didn’t seem out of place as it blends in perfectly with Parris Island’s natural beauty.  Originally designed in 1947 and renovated in 1999, the Legends course is now ranked as one of the Top 10 military golf courses.   And while many US military golf courses are primarily for active-duty, retired, or reservist servicemen and women, civilians are welcome to use the course at any time, needing to only show identification, car registration, and proof of insurance at the main gate at the Depot.

Of special notation is the fact that every hole at Legends is named for a Marine Corps legend who went through basic training at Parris Island.  Two are named after Marines who helped raise the US flag on Iwo Jima, and one is named after Pro Baseball Hall of Famer Roberto Clemente, who played for the Pittsburgh Pirates in the 1960’s into early 1970 until a plane he was traveling on carrying earthquake relief supplies to his home country of Nicarauga crashed.  Clemente passed through Parris Island in 1959.

After spending some time in awe of the golf course, we then enjoyed the Charlesfort-Santa Elana National Historic Landmark, and parts of it’s Nature and History Trail.  The Santa Elena Monument celebrates the area where France and Spain vied for control of the New World near the end of the 16th century, and commemorates the friendship and common hreitage of the US and Spain.  There is a 1/2 mile interpretive trail that takes you through the 16th century town site of Santa Elena, one of the most historic early colonial sites in all of North America.

You can see artifacts from the site preserved in the Parris Island Museum.  The museum houses artifacts not only from the Marine Corps, but also from the rich history of the Port 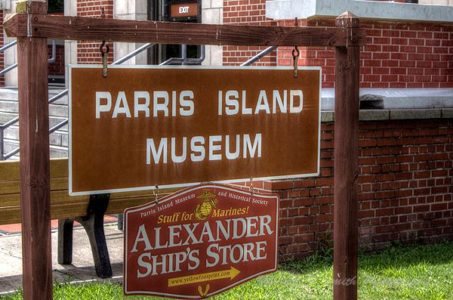 Royal region.  Thousands of artifacts, images, and other materials illustrate the varied stories from throughout the vast history of Parris Island.  Its Local History wing offers glimpses of life across the Lowcountry from prehistoric times through the 19th century with old Spanish made artifacts as well as Native American finds, and the rest of the 8,000 square feet of exhibit space is dedicated to Marines in Service, and Recruit Training. The main exhibition hall commemorates Marines in every major American conflict from the founding of the Corps in 1775, up to present day operations in the Middle East.  Entry to the museum is free, and it also has a gift shop named Alexander Ship’s Store which is run by the Parris Island Historical and Museum Society, a 501 (c) non-profit, which provides support to the museum.

Ending our tour at the Peatross Parade Deck and the Iwo Jima monument was perfect.  It provided one with the feeling that you can start a tour of Parris Island in the 21st century, then go back in time to the 1500s, and then come back to today yet again, all in a three hour period.    A bonus was getting to watch marching female Marine recuits going through their drills.

At the Peatross Parade Deck there is a monument to all Purple Heart recipients living or deceased who have earned the medal in the service of our nation, and one dedicated to the Drill Instructors who have trained recruits at the Depot over the years.  The parade deck, named after former commanding general of Parris Island Maj. General Oscar Peatross, was unpaved for years.  From 1915 through 1942 recruits drilled in loose sand or deep mud.

Also located at the Parade Deck is the Iwo Jima Monument commemorating the heroic flag-raising on Mount Surabach, Iwo Jima by 5 Marines and a Navy corpsman in 1945.  An inspiration to all Americans as a symbol of freedom, the momument personifies serveral of the many qualities Marines instill in recruits including the rugged determination to overcome insurmountable odds.  Replicating the most famous photograph of all time by combat photographer Joe Rosenthal, the statue was made by Felix de Weldon and was used to raise money for the much larger bronze menument located in Arlington Cemetery in Washington, DC.

Feeling refreshed, and thanking our guide, we left Parris Island feeling quite connected to it.  And you will too.

For information about taking the Iron Mike tour of Parris Island, call 843-228-3650, or click here for more information. 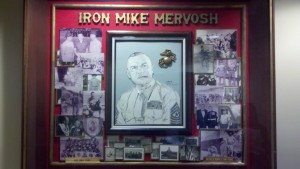