More than 250 people converged on The Shed in Port Royal to support four non-profit organizations at the 4th annual Beaufort Beauties pageant on Saturday night.  There was no shortage of glitz and glamor either. 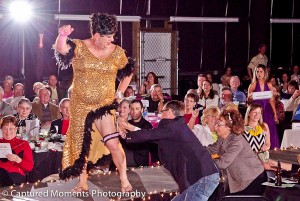 returned this year as mistress of ceremonies.

The contestants performed together for the opening number to Gangnam Style and afterwards wowed the judges and the audience with the talent portion of the evening. Van Willis took the Best Talent title this year with his roller skating routine. While Jeff Draude’s rifle skills were impressive, he fell just short of Willis, but secured the Evening Gown competition that followed.

Organizers, Main Street Beaufort, USA, announced that the contestants raised over $10,000 through their own fundraising efforts prior to the show. Jerry Ashmore won 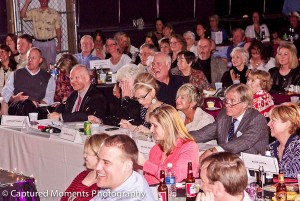 the title of Miss Congeniality, which went to the contestant who raised the most money.

The contestants also answered questions that were asked by a panel of judges during a Q & A session. This year’s panel of judges was comprised of Michael Rainey, Holly Jahn, Nan Brown Sutton, Pat Green, and City of Beaufort Police Chief, Matt Clancy.

Our hats off to the men who donated their time, effort, a little pride, and some facial/body hair for these fantastic local Beaufort causes.

For dozens of great photos of the 2013 Beaufort Beauties Pageant fundraiser, visit this link.