ARTworks has announced some upcoming special events over the next few weeks and folks can enjoy Shakespeare, Yoga + Art, and a special Mother’s Day concert too!  Lots of things are going on at ARTworks, the community arts center in Beaufort, the coolest arts council in the Carolinas, the home of the BIG Story Fest.

May 10th in the black box theater at ARTworks in Beaufort Town Center, Simply Grand presents a Mother’s Day concert, with melodies, loving lyrics, and special ticket prices~ $12 for all tickets, $7 for children. The concert begins @ 7:30, surrounded by a quilt show in the gallery, artists working in their studios, and the classrooms where creativity happens.

After years of performing together locally and throughout Northeast Florida, Simply Grand was organized in 2010. The nucleus of the 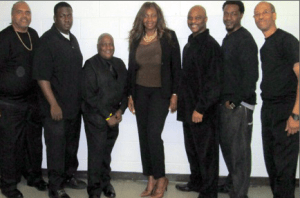 group includes Keyboardist Kenneth Varner, Saxophonist Gregory Whittaker, and Drummer Trevor Daniels. The trio of musicians soon discovered a certain chemistry and musical affinity that led to their formation of Simply Grand, a versatile musical ensemble that has a unique ability to shift between Contemporary Jazz, Gospel, and Blues with ease. One the band’s most notable performances occurred during the Beaufort 300 celebration in which the group played to a packed house at the Beaufort Waterfront Park.

Begin your journey to expanded personal awareness with perceptual stimulation through yoga and guided meditation. Move Your Art ON….! with Cindy Male on Saturdays at ARTworks from 1–3:30, April 20 through June 1 (no class May 11th).  This class is for 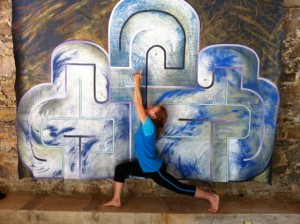 beginning, budding, and seasoned artists who would like to get out of a rut and enjoy discovering opportunities to access what Edgar Cayce called the ‘super conscious’ mental level. Not sure what it is you want to ‘GO FOR’? Join us and find out.
Parents with teens, this is a great ‘let’s do this together’ activity. Be prepared to share and to have a bit of homework. Register at ARTworks, 379-2787, and contact the artist at 40-277-8651 with questions and for the supply list (drawing pencils, sharpener, eraser, sketch pad, color pencils, journal, a yoga mat or towel.) No previous yoga experience necessary. For high school ages and up, $25 per class, six class sessions that build upon one another.
Cindy Male is an artist, educator, and resident artist at ARTworks. She received her MA from Vermont College at Norwich University in Creative Studies, and an MFA in Fibers from the Savannah College of Art and Design. Her fine art is a result of her studies of left brain/right brain theory, chaos theory, and studies of brain states and expanded consciousness. Male’s fine art drives her applied work. Her love of buildings and inclination towards mathematics has given her a passion for installation art. Her portfolio shows diverse “site specific” installations and mural work created to enhance design elements and architectural features without dividing, cluttering, or inhibiting the flow of energy within the space. She uses her custom fabric design to add emphasis and definition. More at cindymale.com, zemizen.com, and 340-277-8651.
———————————————————————————————————————————————-
Hamlet: It is I, Omelette the Cheese Danish!

Back by popular demand for four shows only May 30th through June 2nd, in “The Complete Works of William Shakespeare (Abridged)” the audience gets to see three actors sweat as they work, guffaw, sword fight, and stagger their way through all 37 of the Bard’s plays in 97 Minutes.

It’s the complete works, and it’s a complete comedy. 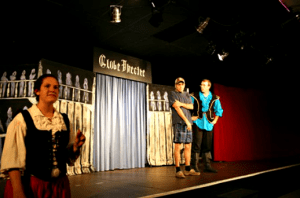 “I love the fast paced energy of this show and that we really get to play with the audience,” said Heather Denardo, who plays none of the female roles. “My favorite part of the show is the Othello rap. I remember watching it during a college Shakespeare course and it really stuck with me, so I’m excited to perform it!”
As the Today Show says: “If you like Shakespeare, you’ll like this show. If you hate Shakespeare, you’ll love this show!” The Complete Works (Abridged) was born when three comics, after honing their pass-the-hat act at Renaissance fairs, premiered their preposterous masterwork at the Edinburgh Festival Fringe in 1987. It quickly became a worldwide phenomenon, earning the title of London’s second-longest-running comedy after a decade at the Criterion Theatre.
This play one of the world’s most frequently produced plays, and has been translated into several dozen languages. Fast paced, witty, and physical, it’s full of laughter for Shakespeare lovers and haters alike.
Produced by Palmetto Theater Xperiment and directed by J.W. Rone, “The Complete Works of William Shakespeare (Abridged)” will be in the black box theater @ ARTworks in Beaufort Town Center, May 30-June 2, 2013 at 7:30pm and 3pm on Sunday. $17 per person, $12 for students (13+), $7 for children (12 and under) and $12 for groups of 10 or more. Thursdays are Pay What You Can ($5 minimum.)
Juliet: What’s in a name, anyway? That which we call a nose by any other name could still smell.
Previous article
Next article