By Donna Perry |  The Anchorage, also known as the William Elliott House is believed to be built prior to the Revolutionary War. Stylistic evidence suggests it’s construction dates closer to 1800. This massive home is constructed of tabby and boasts three stories of glorious architecture. The stucco covering the tabby blocks gives the home a look of concrete. The Elliott House is the tallest, double-pile tabby structure. The home illustrates the large scale multi-story tabby construction at its most developed stage.
The home is believed to have been built by Ralph Emms Elliott, a planter and the owner of Cedar Grove Plantation on Port Royal 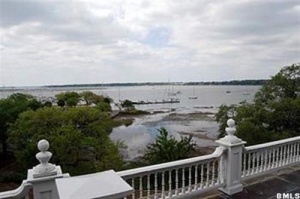 Island. Ralph Elliott was neither a leading landowner nor a major slave holder. The first US census listed him as the owner of twenty two slaves. This was considered a very low number among the Beaufort elite. This suggests the home may have been built by a substantial amount of money left by his father, William Elliott I. His wealth had a large span, including plantations located on Parris Island. There were two other brothers that benefited from this estate. William and Stephen.
On the eve of the Civil War it was lived in by William Elliott III. He was an impressive man that was well known as an agriculturist, author, sportsman, poet and a politician. He was one of the most respected men in the state, being a strong pro-Southerner and in favor of slavery. He opposed Secession and resigned his seat in the Senate rather than vote for Nullification. He remained a firm Unionist until the Civil War broke out. Mr. Elliott, like Robert E. Lee, went along with his state. On November 7, 1861 like the other residents of the Beaufort, William Elliot deserted his home as the town of Beaufort was occupied by Union forces and the home was used as hospital number 11. It was designated as the Mission House. William Elliott III died nearly two years later in Flat Rock North Carolina.
After the Civil War, the home went through several owners and was used for numerous things before falling in the hands of a man who would bring it back to its glory.
In the late 1800s to the early 1900s a retired naval officer, Admiral Beardsley, acquired the home for a small fee of $4,450. He spent $80,000 remodeling the home adding stucco to the exterior and beautiful carved woodwork to the interior. He renamed it “The Anchorage”. After his time the house was used as a guest house for many years.
The Elliott House now sits empty waiting on its next adventure in history.
It was listed on the National Register of Historic Places November, 1971.