By Cindy Reid |  In 2005, the house was collapsing. Five days before it was to be torn down John Keith was called in by his old friend Neil Trask. Well known in the area for saving doomed houses, Mr. Keith came out and took a look at what was left of the once lovely Pick Pocket Plantation.” It was in bad shape”, he says “It was going to need a complete overhaul if we were going to save it.”

Pick Pocket was the original home of the Trask family here in Beaufort, owned by the family for almost 100 years. As bad as it looked in its current state, Mr. Keith could see that the house had distinctive architectural style, complete with wrap-around porches and a widow’s watch on the very top of the house. At one time, the plantation covered many acres, but it has shrunk considerably through the years as the land was developed. Mr. Keith thought he would need two acres surrounding the house in order to restore the building, but as many projects grow, so did this one and he ended up with fifteen acres.

Today there are nine historical buildings on the property, including fully working stables. After extensive renovation and rebuilding, the house has been completely redone and furnished with period antiques and is now open for tours.

In addition, Pick Pocket hosts a thriving Farmers Market twice a week which offers a wide array of fresh local produce, local food specialties, crafts, art and tours of the plantation home. Pick Pocket Plantation is another piece of history enjoying a new life through the efforts of Mr. Keith.

Born and raised in Pittsburgh Pennsylvania, Mr. Keith joined the Marine Corps in 1957 and after basic training at Parris Island he was permanently stationed there on the rifle range for three years. In 1957 Beaufort was a “one stop light town”, or as Mr. Keith was told by fellow marines, Beaufort was “don’t blink or you will miss it” kind of place. But that’s not what he saw. He says, “I liked Beaufort right away, it was so pretty and charming and it looked like a real nice place to live.”

Mr. Keith laughs, “I would look at Port Royal from Parris Island and little did I dream that someday I would own property there, and make my life here in Beaufort!” He continues, “As a Christian I give God all the Glory. I knew that God has a plan for me and surely this is part of the plan.”

Mr. Keith took the city of Beaufort plumbing test in 1958 in order to get a plumbing license. “I did that before I got married or left the Marines, so I would be ready to support myself and a family. At that time I was making the grand sum of $84 every other week from the Marines!”

He opened the Keith’s Plumbing on August 18, 1960. He and Thelma, who he calls ‘the sweetest of women’, married in March of 1960. They have been married for 52 years. Thinking back now he says, “We struggled like crazy. In fact it was one year before we could afford to place an ad in the phone book!” The Keith’s had four children, sons Mark, Kevin, Timothy and daughter Dawn. Today John and Thelma are the proud grandparents of fifteen grandchildren.

The plumbing business started out on Carteret Street before they settled into their permanent location on Ribaut Road. Always open to new opportunities, in 1971 they bought a restaurant, the “Lobster House”, and built a large rental business which at one time operated 400 properties throughout Beaufort county. Mr. Keith says, “We worked around the clock!”

Mr. Keith says he always had an interest in history, and “We loved old furniture and we furnished our home with antiques that I refinished myself.” And it wasn’t just furniture, he says, “My son Kevin and I started buying old cars, he would do the engine work and the body work and I would refinish the wood on the station wagons. We have some nice ones, four here at Pick Pocket, twenty total.”

“It started out with old furniture and old cars, and then I came across a story in Southern Living about a one room schoolhouse that had been made into a restaurant. I thought that was a great idea so I looked in 100 mile radius in every direction, and finally found an old school house in Yemessee that had potential. It was the old Fennel schoolhouse and was a nice building. I wanted to move it to Port Royal but in order to get it there we had to take the roof off. Escorted by the Highway Patrol it was quite a sight! But we got here to Port Royal, where it is today. “(Currently home to the Suwan Thai Cuisine restaurant on Paris Avenue in Port Royal) “We put that in and that was the first.”

The buildings found Mr. Keith and he accommodated by moving them and saving them from certain collapse. “People knew I was interested in old houses, buildings that had historical value and they started calling me when one was about to fall down or be demolished. We saved a slave house; we saved the wood from the front and the side and rebuilt the rest. The old Port Royal railroad station was moved over; in fact it is now our church, New Life Tabernacle. The town of Port Royal called one day and said ‘Can you use the caboose?’ so we brought that over too!” he says. There is also an old gas station and a building from Blackville. “That is the biggest one, we brought it 89 miles which is the farthest any of the buildings have travelled!” Locals and visitors delight in the opportunity see these historical buildings, where they add charm and character to the lovely village of Port Royal.

Unfortunately, few if any records exist regarding the origins of Pick Pocket. Mr. Keith says, “During Sherman’s March the records were sent inland where they were subsequently lost or destroyed.”

“When I got here the plantation was totally overgrown, and it took three years to get it in its present shape. In 2010, the Beaufort Historical Society wanted it on their fall tour of homes- so we got it done and ready to show! “Today the heart pine floors gleam as the sun streams through the large bay windows. Never done, he says,” We still have the mule barn yet to do. I did hear of a ‘hammer mill’ on the property but I went through the woods and all that was left was a pile of rubble, “says Mr. Keith.

As to the future of the plantation Mr. Keith says, “The Farmers Market is a real nice thing, but I think we can do even more with it, and I have been looking into different ideas as to how to best use the property.” A man of faith, he says “God has a plan and I will keep opening doors until God leads me through the right one.” 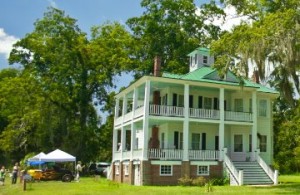