More than 2,300 participants and spectators are anticipated at the 7th Annual Beaufort Twilight Run and Oyster Roast next Saturday, March 21st as the area’s largest running party invades the Spanish moss lined streets of Habersham.

The evening is capped off with a festive Lowcountry Oyster Roast and, back by popular demand, live music from Savannah band, Tell Scarlet presented by Collins Pest Control. 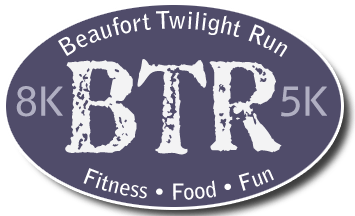 Last year’s family-friendly event attracted athletes of all ages from the Lowcountry and across 22 states.

“There’s a lot of excitement around this year’s event,” said BTR Event Director, John Kraft. “You can walk or run the 5K/8K through the beautifully picturesque Habersham community – and this year, there’s a new course and prizes for the Kid’s Fun Run. Throw in oysters and a great band…c’mon, does it get any better?”

To celebrate the 7th Anniversary, the BTR’s cash prizes total $2,800. Payouts will be awarded in the 5K, 8K Runs as well as the Beaufort Challenge. Categories include the three overall male and female winners of each race, as well as cash awards for 8K and 5K male and female Masters (40+), Active Duty Military and Hometown Hero (a Beaufort County resident).

In addition to cash prizes, age group winners will take home the winning photograph of this year’s photo contest by Kelley Luikey.

For online details about race registration, oyster roast tickets and more visit www.BeaufortTwilightRun.com – early registration discounts are available for all participants, as well as additional discounts for groups of ten or more and active duty military.