Earlier this year the call came.  Beaufort had made a top 10 list of seaside towns and was in the running to win the 2nd annual ‘America’s Happiest Seaside Town’ contest in Coastal Living magazine‘s poll.

We were all asked to vote through Facebook and on Coastal Living’s website.  Again, and again. And vote we did.

Because we won.  It was announced on Tuesday that Beaufort had been voted America’s happiest seaside town.

Witnessing the voting at a feverish pitch at times on our Facebook page, Eat Sleep Play Beaufort, we watched the lead teeter at times, and change hands too.

In the end, we’re told it was a tight race between Harwich Port, MA and Beaufort.  We’re happy to have the title. The city will

undoubtedly reap the tourism-benefit from this exposure.  Coastal Living is a well-read and respected magazine.

The announcement stated in part, Beaufort “boasts the perfect balance between Lowcountry friendliness and urban refinement, and after this contest, we learned of its strong sense of local pride.”

Well, that we already know.  We see a profound sense of community pride in Beaufort nearly every single day.  It’s also a relatively happy town.

It continued to say, “the town is known for its historic antebellum architecture, exquisite local cuisine, and rich African-American heritage…then, as any local will tell you, there’s the shrimp, the sweet tea, and the mandevilla-perfumed breezes that imbue the slowed pace of Lowcountry life.” 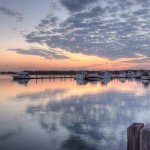