Beaufort, South Carolina in actuality, is one of the most beautiful places you could ever wish to be stationed at because there is just so much to see and appreciate.

One would normally assume that upon receiving military orders to Beaufort it would just be another run-of-the-mill military town filled with barbershops, tattoo parlors, and chain restaurants. But if that’s what you think Beaufort merely consists of, you have thought wrong because this little hamlet is far from your typical military town.

With the different installations in Beaufort, there’s a constant ebb and flow of military families arriving and departing our beautiful little city by the sea, and it is oftentimes that our military members stationed here are unaware of the beauty of the area and bevy of local events that Beaufort has to offer. Sadly, I hear this quite frequently from other military spouses and their families. We simply feel that Beaufort is just another temporary stopping point, so why feel the need to explore it?

What a mistake it is to not get out and explore everything Beaufort has to offer. From eclectic, unique shops and restaurants on Bay Street, to beautiful, antebellum homes on the other side of Carteret, unique neighborhoods like Habersham, to Port Royal’s tranquil views and some of the most breathtaking sunsets you could ever experience, our town has beauty, grace, and that ‘small-town appeal’ that seems almost extinct in today’s society.

You could offer my husband orders to anywhere in the world, even Hawaii again, and he’d choose Beaufort over them all. This town has literally become a part of us.  It is where we first began, and it is where we have chosen to settle and raise a family one day. I take immense pride in being the one to show my husband all of the beauty, culture, and life that Beaufort has to offer.

Oh, and the cuisine too!

We still make it a point to go on ‘dates’ at least twice a month, which gives us something to look forward to and keeps away the monotony in our lives.  One of the best things about living in Beaufort is that it’s literally the perfect town for date night. There are so many events and happenings that it makes it next to impossible not to find something to do in Beaufort.

A typical day date for us will start off with lunch at Plum’s, preferably on the porch overlooking the Waterfront, followed by a stroll down Bay Street, in which we admire the artwork at Rhett Gallery, peek in some of the gift stores and almost always end up at Southern Sweets for a milkshake or ice cream sundae. Evening dates typically involve either burgers and beer at Luther’s, followed by dessert and coffee at Common Ground, or dinner and drinks at Breakwater, one of our favorite restaurants, if we’re feeling the urge to get dressed up and celebrate a special occasion.

Another way we like to discover and explore Beaufort is by water. Higher Ground Outfitters offers kayak and stand-up paddle board rentals at very reasonable rates, with some of the nicest staff you could ever meet. Whether you’re a first-time kayaker or an expert, they’ll guide you in the right direction, whether you’re looking to explore the downtown area waterfront or the outer Sea Islands.

But exploring all that Beaufort has to offer doesn’t have to cost anything, believe it or not. With people struggling in today’s economy, finding it in your budget to go on a date may seem difficult, if not impossible. But don’t let that stop you from discovering the history and culture of this town. Simply pack a picnic lunch and head out to St. Helena Island for the day to explore the Chapel of Ease, constructed in the mid-1700s and currently lies in ruins as a result of a forest fire. A small cemetery and tomb also lie on the property.

A few miles past the Chapel of Ease, lies Fort Fremont. Built at the end of the 1800s to defend Port Royal Sound at the onset of the Spanish-American War, Fort Fremont was never involved in military action and was subsequently decommissioned in 1901. It was officially added to the National Register of Historic Sites in 1989. The structure is partially hidden by vegetation but still remains to this day, as is definitely a sight to see. It borders Port Royal and St. Helena Sounds and overlooks Parris Island, which is the perfect setting for a picnic on the beach.

**While the Fort Fremont Preserve is closed during construction of an Interpretive Center by Beaufort County, the Friends of Fort Fremont is presenting historical lectures on one Saturday each month.

Another must-see is the infamous Old Sheldon’s Church Ruins, located on Old Sheldon’s Church Road on the outskirts of Beaufort. The church’s history is steeped in tragedy.  Originally constructed in the mid-1700s, the church was burned in 1779 by British troops during the Revolutionary War, in which only the outer walls remained intact. It was then rebuilt in 1826, only to once again meet a fate at the hands of war. The site is eerily breathtaking, with swelling Live Oaks draped in Spanish moss surrounding the structure, and is extremely popular among both professional and hobbyist photographers.

The local waters are full of fabulous seafood if you know where to go and what to use to catch it. For first-timers, I’d recommend crabbing, which is great for families with children. All that’s required is some long twine, chicken legs, a net, and a cooler, and of course, good spot. Blue crabs typically prefer to hang out underneath floating docks, at boat landings, and piers. They also sell crab nets, which work great for children, as they are much more catch-friendly versus pulling up the string and using the net to catch the crab. While cleaning them can be tedious, it is extremely worth the effort- I make anything from crab omelets to homemade she-crab soup with our catch.

Another option for the more advanced seafood fisherman is ‘shrimping.’ When my friends in New York first caught word of the fact that I knew how to throw a shrimp net, I proudly responded with, “Shrimpin’ ain’t easy.”

Shrimping requires both a cast net and some skill. While I like to constantly remind my husband that I was the one who taught him how to throw
a cast net, he quickly attests to the fact that he is indeed the better thrower, to which I begrudgingly agree. Be prepared to get a little dirty- I recommend wearing old clothes and a pair of old boots when doing so. Although it doesn’t make for a fancy, romantic event, it is something you will never forget. The upside is that local shrimp tastes better than any shrimp you could ever buy out of the freezer of a grocery store. I can always tell when a restaurant in Beaufort uses local shrimp or imported shrimp, and once you have your first taste of local shrimp, believe me you’ll be able to tell the difference too.

Whether you choose to spend money or save money, getting out of the house and discovering Beaufort is worth the effort, and I promise, you won’t be disappointed. There are so many sights to see, local places to eat, local stores to browse, views to admire, and events to attend, that I honestly don’t really remember a time where I’ve said to myself, “There’s nothing to do here!”

All it takes is a little creativity and imagination. 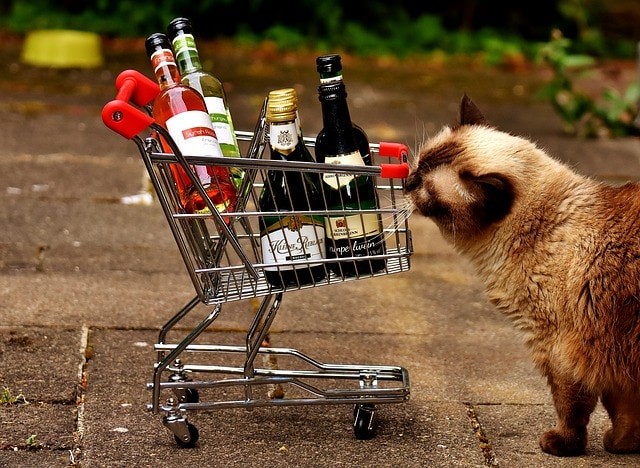 Holiday No-Nos for Your Pets