At home with Beaufort's history at the Charles Edward Leverett House

The Charles Edward Leverett House, built possibly in 1800, is one of the beautiful homes lining Bay St in historic downtown Beaufort. The home represents the early upper-class homes during the late 1700’s and early 1800’s. It’s large porches and moss draped trees are a fine example of the Lowcountry living enjoyed in the coastal areas of South Carolina.

The Leverett house sits among the massive mansions on the bluff area of downtown Beaufort.  Located on the corner of Bay and Harrington

Streets, construction of this house has often been cited as having occurred prior to the Revolutionary War, as has the story that it was moved to Bay Street from St. Helena Island by Dr. Benjamin Rhett around 1850. There are no records to prove such, which is common among the old houses in Beaufort. However, construction and stylistic evidence suggest the house was built in the early 1800s.

Like all of the other beautiful antebellum homes in Beaufort, it was deserted on November 7, 1861 when the Battle of Port Royal came upon Beaufort. The home was occupied during the entire war by the 100th Pennsylvania Volunteer Infantry Regiment (known as ‘The Roundheads’).

After the Civil War, Reverend Leverett, who was the last rector of Old Sheldon Church, wrote the following letter to General Rufus Saxton:
“Sir, I am the owner of a home in Beaufort, the 5th from the west end of the Bay, and a

plantation on the Main, one mile from Garden’s Corner on the lower road to Pocatalico, on the right hand side across and bordering Huspah Creek.From the latter place, I was ordered by the Confederate picketry.

I have taken the oath required by the U.S. and now write to claim my property.
Colonel Ely informed me that I was to address you and said there would not be the least difficulty in my recovering the home. I am an Episcopal clergyman and have been in the exercise of my dismal engagements throughout the war at this place.

Will you inform me in regard to the above? You are aware that we cannot, on account of the climate, return to our places until after frost, and then I do not know in consequence of what I hear of the occupation of the Negroes, if it would be possible at that time.

You will oblige me, General, by addressing a letter to me stating if I can have my two homes and land.

I am, respectfully your Obt. Svt., Charles Edward Leverett.”

Thankfully Mr. Leverett was able to regain ownership of his beloved home and it remained in his family till the 1920’s. This home holds a

significant key to the history of what was going on in Beaufort before and after the Civil War.

Potentially changing local history, there were 230 letters collected from the correspondence between 1851 and 1868 by members of the Leverett family.  The letters recount everyday sacrifices and landmark events, including the death of the commanding officer at Fort Sumter, the burning of Columbia and the destruction of Old Sheldon Church (not by General Sherman, as is the popular legend).

Take a stroll down Bay Street and admire the beauty and picture the past of our beloved historic Beaufort. Read some of these letters before you do. It’ll help you get a real picture of the history. 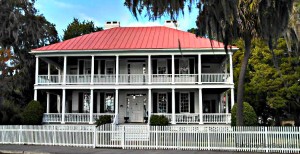