New section of Spanish Moss Trail to open before Thanksgiving

After a busy two months of construction, the Spanish Moss Trail’s 2.3 mile section between Ribaut Road in Port Royal and Allison Road in Beaufort will officially open for public enjoyment the week of Thanksgiving –on Tuesday, November 26 at an 11am Ribbon Cutting Ceremony on the Trail at Westvine Drive, in Beaufort.

When this rails-to-trail greenway project is complete, it will connect 14 miles of a 12-foot wide, paved pedestrian and bike path –

through the towns of Port Royal, Beaufort, Burton and Grays Hill to the Whale Branch Pier. With the Model Mile complete (between Depot and Allison Roads), two additional miles about to open to the public, and almost four more miles being designed for implementation – there will be a connected 7-mile path open by Summer 2014.

Moss said funding has been secured for the first 5.4 miles of the Trail (Ribaut Road to Parris Island Gateway) through gifts and challenge grants from the James M. Cox Foundation of Atlanta, along with the financial collaboration among the Friends of the Spanish Moss Trail, City of Beaufort, Town of Port Royal, Beaufort County, Beaufort Memorial Hospital, and Atlanta’s PATH Foundation.

As local momentum builds for continuing the Trail, organizers are now setting their sights on funding the 1.6 mile segment from Parris Island Gateway to Laurel Bay Road at the Marine Corps Air Station. With a total cost of $850,000 to complete this section, the Cox Foundation has issued another $350,000 challenge grant. This challenge grant was followed up with a $250,000 lead gift from the Blue Cross Blue Shield of South Carolina in honor of John M. Trask, Jr. for his service to their Board of Directors.

Only $250,000 remains to be raised in order to complete the Trail from the Town of Port Royal to the Marine Corps Air Station – bringing the community a connected 7 miles of the Spanish Moss Trail in 2014. Construction can start in Winter 2014 if the funds are secured.

A total of $600,000 in lead funds from the Cox Foundation and Blue Cross Blue Shield will provide more than a 3:1 match for every dollar given. Donors who give or pledge to the Friends of the Spanish Moss Trail by December 31, 2013 will be recognized in the following ways:

Tax-deductible contributions from individuals and businesses are being accepted by the Friends of the Spanish Moss Trail (a 501(c)3 nonprofit). To donate, make checks payable to: Friends of the Spanish Moss Trail (P.O. Box 401, Beaufort, SC 29901) or donate online at www.spanishmosstrail.com. For more information, email Executive Director Dean Moss or Public Awareness Consultant Sissy Perryman at info@spanishmosstrail.com.

While private funds are being assembled for the Parris Island Gateway to Laurel Bay Road segment, Beaufort County is in the design and engineering phase for their federally-funded 2.1 mile segment from Depot Road to Parris Island Gateway. According to the County’s Planning Department, plans for construction are anticipated in 2014. 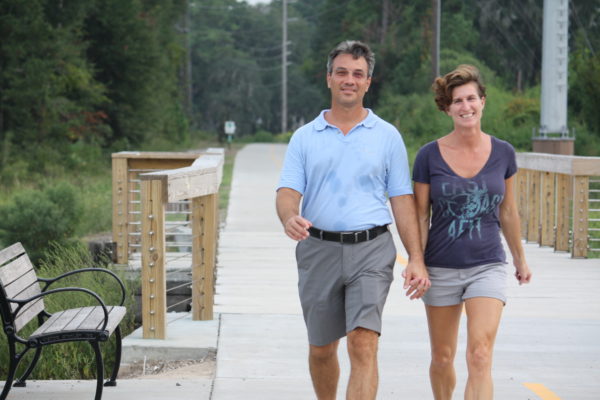