Take a quick drive up Highway 21 to Frampton Plantation in Point South and join the South Carolina Lowcountry Tourism Commission, Col. Charles Colcock Sons of the Confederate Veterans, Camp 2100 and the South Carolina Palmetto Battalion in celebrating the 151st Anniversary Battle of Pocotaligo with a reenactment.

The Battle of Pocotaligo was the largest action of a three-day expedition during the Civil War intended to disrupt the Charleston & Savannah Railroad and took place on October 22nd, 1862. There were only 2000 Confederate troops under Col. W.S. Walker defending all of 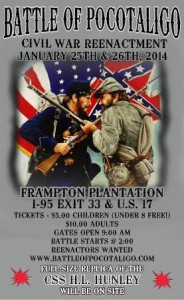 the area between Charleston and Savannah, and approximately 4500 Union troops under Brig. Gens. J.M. Brannon and A.M. Terry had landed at Mackays Point, seven miles south of Pocotaligo to carry out the incursion.

Join in our living history.

The Battle of Pocotaligo will be recreated on January 25th and 26th 2014, at the Frampton Plantation, 1 Lowcountry Lane, Yemassee, SC.  Visit http://www.battleofpocotaligo.com/ or call 843-717-3090 for details. Sponsored by the South Carolina Lowcountry Tourism Commission, the Col. Charles Colcock Sons of the Confederate Veterans, Camp 2100 and the South Carolina Palmetto Battalion.