New local 'Creek Sauce' changing the taste of the Lowcountry 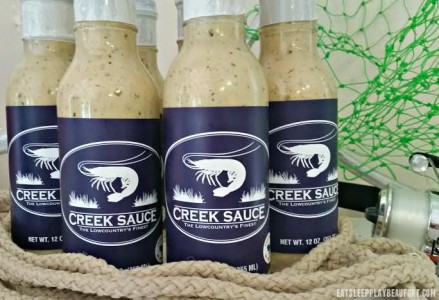 Locals Kyle Strickland and Jay Cook have invented something we may not know we’ve all been missing from our Lowcountry cookout tables and kitchens all along:  Creek Sauce.

The two friends have bottled and are selling their new creation and it’s available throughout Beaufort and the rest of the Lowcountry, and it may just be the best taste to come out of the area since…..Frogmore stew.

Strickland described the new sauce as “a cross between cocktail and tartar sauce.”

“It was originally supposed to be a dipping sauce to go with seafood, but then we tried it on everything, and the result was amazing,” he said. “It goes great with fried or grilled chicken, pork chops, steaks, crab cakes and even venison. It’s not just a seafood sauce. It’s more an all-purpose sauce.”

“When I tried it the first time, I really believed in it and it’s unique,” he said.

Strickland and Cook became friends while serving as deputies with the Beaufort County Sheriff’s Department. Creek Sauce began as the result of a wedding near Beaufort, Cook said. The two had a previous recipe which they modified for the event, and both were really surprised at the crowd’s reaction. “In a nutshell, everyone thought it was ‘to die for’,” Cook said. “It was gone in just a few minutes.”

All in all, it took Strickland and Cook eight batches to perfect the flavoring. “You normally get ketchup or tartar sauce or cocktail sauce when you go to a seafood restaurant,” said Strickland. “This changes the game, and lets you get a unique flavor at home when cooking your seafood, or anything else.”

The sauce is being bottled at Granna’s Gourmet in Charleston, is already being called a “one of a kind product” by food retailers up and down the SC coast, and it’s hit our part of the Lowcountry too.

You can find it in a zillion places, including:

…and it may just end up on the shelves of our local BiLo grocery stores sometime soon.