Make plans to take a haunted tour through downtown Beaufort beginning October 12th as ghostly spirits are expected to take over downtown while the Exchange Club hosts its 20th Annual Ghost Tours.  Sign up now to take a carriage ride or walking tour through Beaufort’s Historic District while listening to haunting tales of the area.

Some of Beaufort’s oldest residents have shared stories from their childhood and the Exchange Club of Beaufort brings these stories to life each October. Costumed storytellers spellbind tour participants with the ghostly happenings while traveling the moss-lined streets of downtown. The oldest ghost in America is said to live in “the Castle,” a 19th century renovated estate located on the river in downtown Beaufort. Beware, ghostly visions have been known to appear on past tours. Walking tour tickets are $12 for all ages and carriage tours are $10 for children ages 3-11 and $20 for adults. All children must be accompanied by an adult.

Tours last about an hour and will run in the evenings of October 12-13, 19-21 and 26-28. All proceeds benefit the Child Abuse Prevention Association (CAPA) of Beaufort County. Reservations strongly suggested. Call 843-52-GHOST (843.524.4678) for information or to make a reservation. Credit cards and personal checks are accepted. 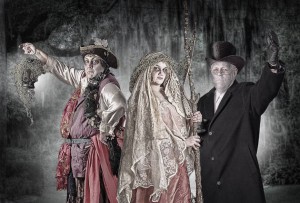