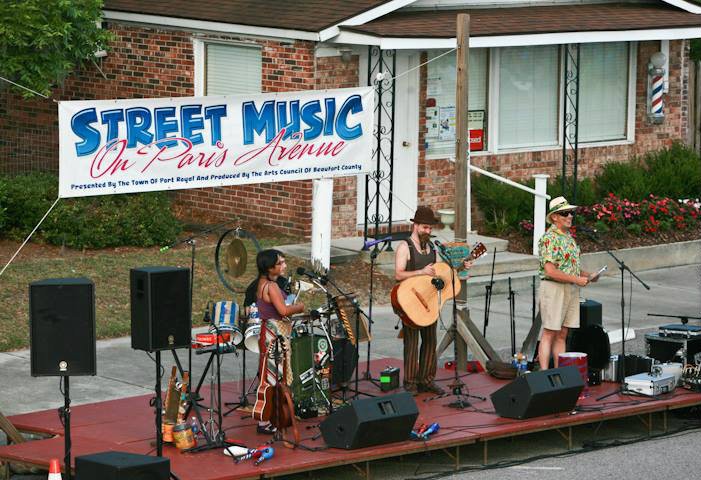 Gut wrenching blues, masters and gorillas highlight the line-up for the Fall Street Music on Paris Avenue series. The free concerts begin August 13th kicking off four great shows in August and September, and it sure looks like we’re in for a great deal of top-notch entertainment once again. Over the past several seasons, thousands of locals have enjoyed the free concerts that are situated right on the street…Paris Avenue, in Port Royal.

Growing in popularity and becoming a much-anticipated event, Street Music on Paris Avenue brings in quality national and international touring musicians of all genres for a FREE community concert right in the heart of Port Royal, SC.

Four free concerts are held from May through June, and also four concerts from August through September each year.  All concerts start at 6pm.

This fall get ready for four that offer a wide variety of musical styles presented by quality performers from across the nation and around the world. August 13th brings an original face to the Street Music stage with the Homemade Jamz Blues Band. one of the first concerts held, the Band is returning to Port Royal for what could be their last performance ever, as a family band. You won’t want to miss this special show.

August 27th brings the Gas House Gorillas, and this should be one rockin’ night with gorillas loose on Paris Avenue! Rick Fink and his Gas House Gorillas bring their olio-slicked Jump Blues, Gypsy Swing, early Rock ‘n Roll, Cajun music and even the occasional funk groove to Old Village Port Royal. The band’s name is taken from a Bugs Bunny cartoon, and these apes live up to it: tattooed tenor Rick Fink, Stu Newman on guitar, Crusher Carmean on bass fiddle, saxsmith Seltzer Jim Davis and drumthwackin’ Eddie Everett are the souls of integrity when it comes to rockin’ the joint in classic fashion. “All. I. Can. Say. Is. Wow.” — Maria Miaoulis, Jazzville

On September 10th Jason Ricci & the Bad Kind will present their unique musical styling’s beneath the live Oaks on Paris Avenue. A former BMA award winner for “Best Harmonica Player”, Jason Ricci is one of the most popular harmonica players on the planet today. Through two plus decades of endless touring, TV appearances, recordings and the internet Jason Ricci’s style of playing is so revolutionary and influential that there exists an entire younger generation of players imitating his music, clothes, gear, and even stage presence.

The final free concert of the season will be a special evening on September 24th with the Guy Davis Trio. Guy is just more popular than we can explain with both acting and music careers.. The son of actors Ruby Dee and Ossie Davis, guy is just amazing with a guitar or banjo in his hands. Davis says his blues music is inspired by the southern speech of his grandmother. Though raised in the New York City area, he grew up hearing accounts of life in the rural south from his parents and especially his grandparents, and they made their way into his own stories and songs. Look for a very special evening of the blues in Port Royal.

Street Music on Paris Avenue was created for the people of Port Royal but has become a draw for audiences around the region since 2007. The concerts present a wide variety of music each season, giving them a true feeling of diversity. Over the past 15 seasons Street Music has presented; blues, jazz, folk, zydeco, bluegrass, country and ethnic groups from all over the world.

Bring your chairs and your dancing shoes when you join the Town of Port Royal for Street Music on Paris Avenue this fall. The free concerts will provide fun for the entire family. All shows are rain or shine and the rain location is The Shed on Paris Avenue, one block from the outdoor site.