February is the Time to Raise Awareness of Teen Dating Violence

February is Teen Dating Violence Awareness Month, and This Month We Unite Under the Color Orange!

·         Adults who use violence with their dating partners often began doing so during adolescence, with the first episode typically occurring by age 15.

As you can see from these statistics, it is very important that we spread awareness about teen dating violence to others in our communities.

We at Hopeful Horizons are proud to offer the community a variety of services. Two of our prevention efforts, MOST Club (Men of Strength Club) and WISE Club (Women Inspiring Strength & Empowerment) are doing big things this month!

This month, MOST & WISE are bringing awareness to youth by way of:

Awareness Bulletins and Posters placed in participating schools to push the agenda beyond the classroom, 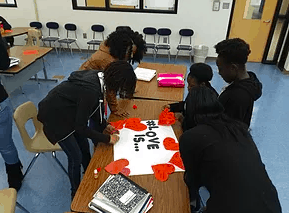 interactive exercises done with the teens to raise understanding of healthy relationships, and so much more!

Your support means more than you know. To the silent victims, the young ones without a place to turn, a trusted shoulder to lean on, or the ability to get legal protection – your support tells them that their voices are being heard. One more voice being heard is one more life that could be saved.

Of course, the effort to end dating violence doesn’t stop on March 1. We are committed to helping teens and young people yearlong. So, we are prompting you to take a continued stance with us in ending teen dating violence by making others aware of this ongoing issue, as well.

One of the ways you can join in on the national movement is by following and posting with these hashtags:

#TeenDVMonth – use this to promote Teen Dating Violence Awareness Month

#HandsUnite – use this to join LoveIsRespect.org in raising awareness of Teen Dating Violence

Thanks again for all of your support and dedication in helping bring awareness to teen dating violence.