Grease hits the stage at USCB Center for the Arts

It is still the word and this September, The University of South Carolina Beaufort’s Center for the Arts is bringing Grease to the main stage. The renowned show featuring a beloved cast of characters, takes the audience on a ride as the 1950’s come alive with a story of teenage angst, ‘souped’ up cars, and first loves. This celebration of rock and roll is full of hits from the popular movie adaptation, like “Summer Nights,” “Hopelessly Devoted,” “Sandy,” “We Go Together,” and many more.

Elaine Lake and Karl Wells lead the cast as the sweet and innocent ‘Sandra Dee’ Sandy Dumbrowski and the leader of the burger palace boys, Danny Zuko. Together with the The

Greasers and Pink Ladies, the gang brings out the highlights of the 1959 school year at Rydell High School. ‘Kenickie’ and Betty ‘Rizzo’, played by James Duffy and Corrie Frohnapel; Doody and Sonny, played by Christian Osborne and Alex Long; Marty and Frenchy played by Lynleigh McLain and Angy Chancay; Jan and Roger, played by Anna Schaffer & Andrew Hillis are full of one-line comebacks, foot-tapping favorites, and swinging dance moves that will leave you begging for more.

With the help of Patty Simcox and Eugene played by Trissy Long and Noah Westman-Bart, Velma Polk wrangles the teenage bunch as Mrs. Lynch, and Daniel Bittick & Jason Lake bring the sounds of the 1950s alive as Johnny Casino & Vince Fontaine. The creative team is comprised of Director, Libby Ricardo, Musical Director, Penney Smith, and Choreographer, Valerie Hobbs. Together, this team staged an incredible version of one of Broadway’s most beloved hits. 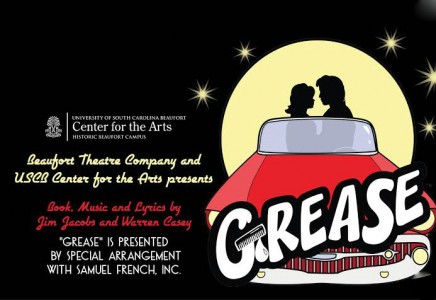