Talk about some GIRL POWER! Rachel Bowling, 30, of Ridgeland SC established a standard that will be hard to beat, setting a record at 42:34 in the Guinness Book of World Record category “female runner pushing a double stroller in a 10k.”

More than 200 Dataw residents and locals along with their canine companions braved the chilly weather Saturday morning for the Lowcountry Habitat for Humanity “New Year, New You” Resolution Run. This year, event coordinators expanded the event to include a 10k in addition to the 5K run/walk which Rachel dominated, double stroller and all!

Barbara Krakehl, Race Director, said that adding a 10k was a big draw for local racers, “It is really exciting to have a record set here on Dataw Island. Adding the 10k really added a level of competition that drew more local runners. We were thrilled to support Rachel in going for the record,” and a lesser record, but a record none-the-less, the event saw a record of the number of dogs who competed.

In anticipation of Bowling’s attempt to set the World Record, Dataw Island recently was granted United States Track & Field certification for its course, described as fast and flat. This allowed Rachel Bowling to compete for the record she broke: a female pushing a double stroller in a 10K on a certified course, coming in at 42:34 beating the old record of 44:45. 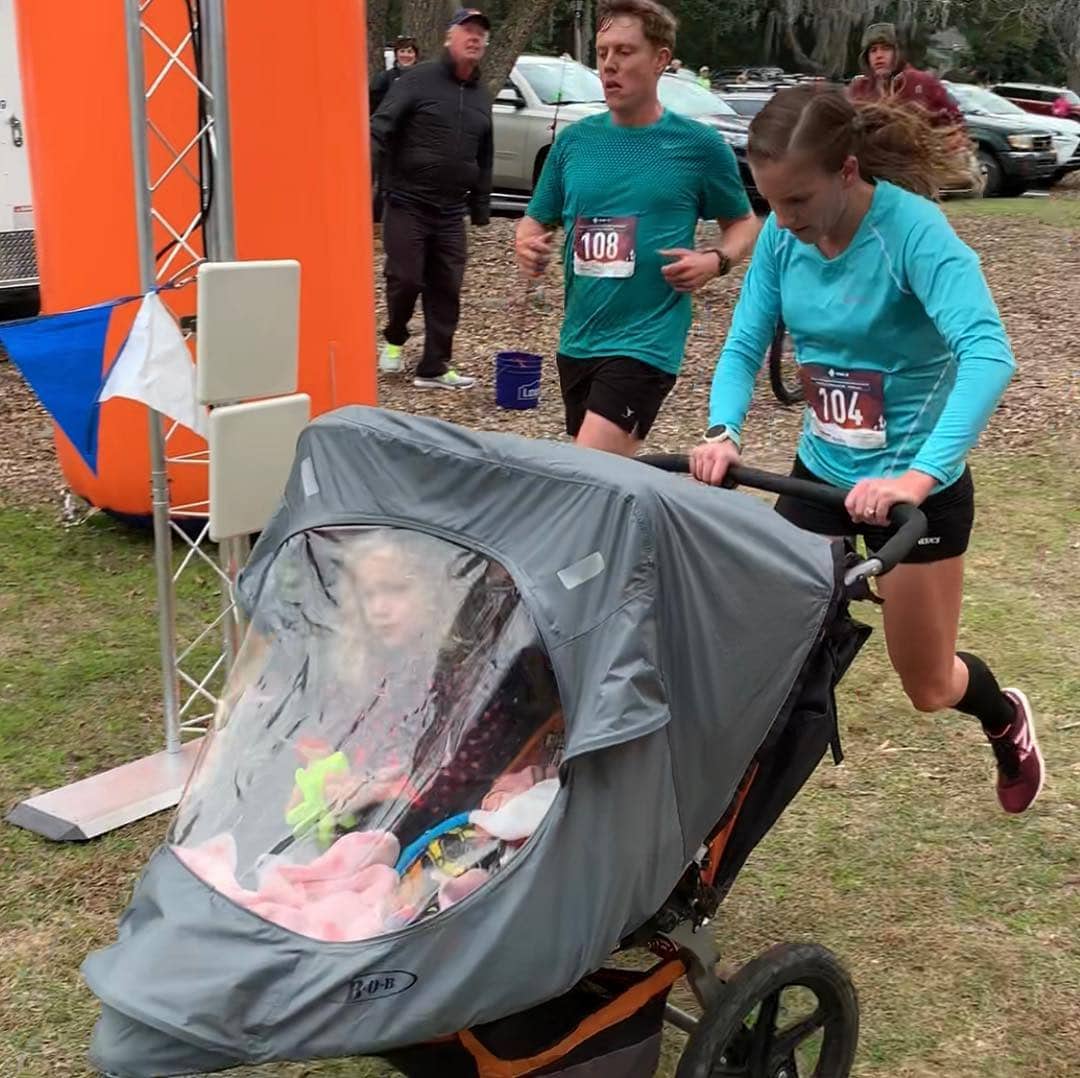 The run/walk is coordinated each year by an all-volunteer group of Dataw Island members to benefit the Lowcountry Habitat for Humanity. Weaving throughout the natural landscapes of the residential community located just outside historic Beaufort, the participants were joined by many furry friends, and enjoyed scenic views of some of the island’s feathered friends as well. 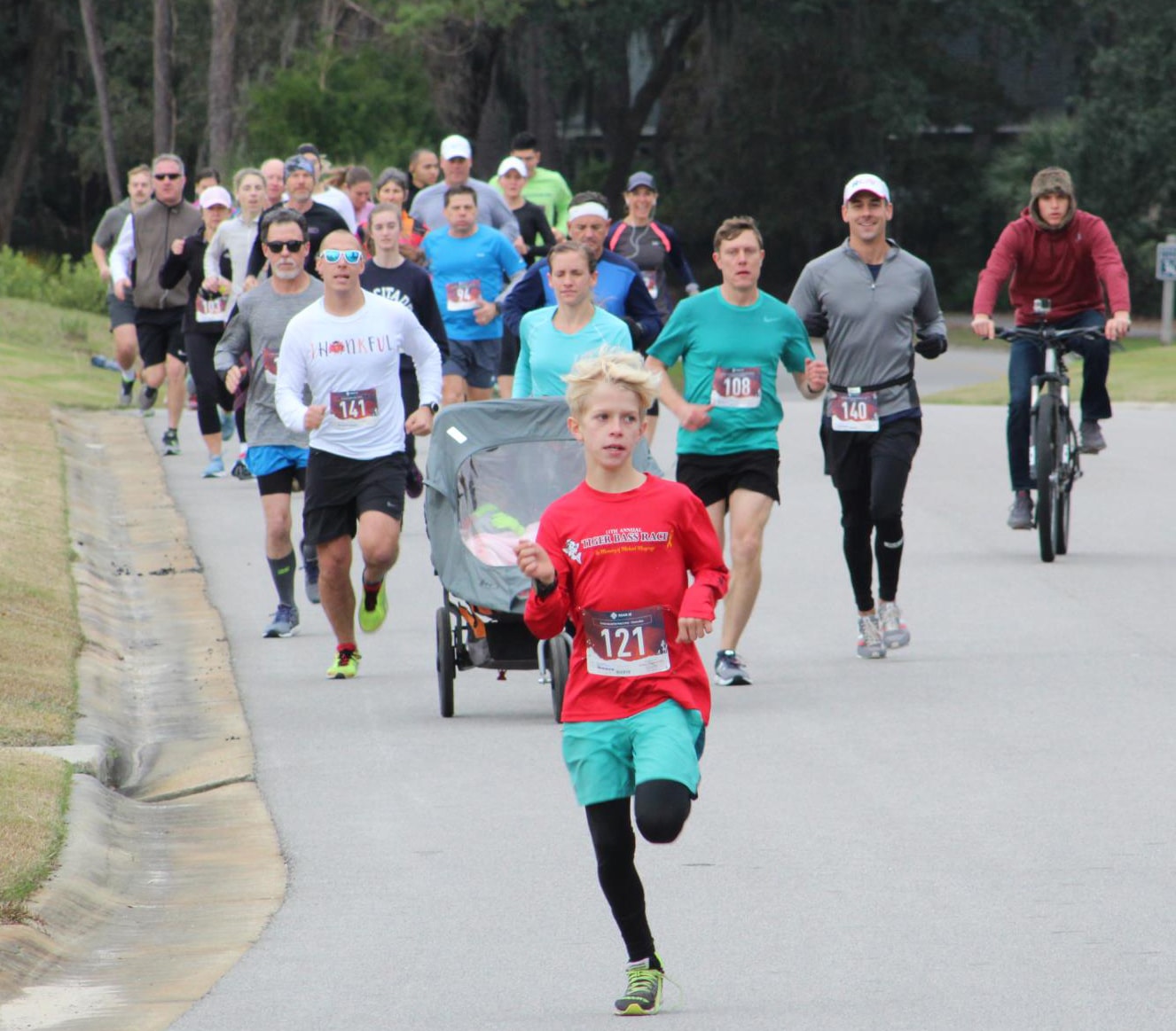 Now in its eighth year, the event raised both awareness and money for Habitat. The fundraising resulting from the event has been instrumental in the completion of a full Dataw-sponsored Habitat House and the ground was broken for a second “Dataw house” just this past fall.

Krakehl, herself a Dataw member, has run the event for eight years, driven by her compassion and appreciation for the important work that Habitat for Humanity does in Beaufort County. “Home ownership is directly tied to a strong community, and with housing costs in Beaufort Country the highest in the state, the lack of affordable housing opportunities creates a need that Habitat does a great job of fulfilling.”

Families who are selected to receive a Habitat for Humanity House are required to participate in the build and will carry an affordable mortgage upon completion. As part of the “sweat equity” in contributing to their home, “family partner” volunteers helped at the race again this year.

“The support really is amazing,” Krakehl said, “from the support from Habitat, the volunteers, the sponsors, Grounded Running, all the health care providers at the Health Fair, even the Dataw security team who coordinated traffic around runners, I am very grateful to all those who help make this event a success.”

The fun kicked off on Friday afternoon at the Dataw Community Center with various clubs & organizations gathering for a Health Fair, which offered lots of opportunities to get inspired for healthier living – from canine training to an acupuncturist and even free blood pressure and hearing screenings. Attendees were introduced to an array of vendors and clubs to help them get – and stay – inspired for the New Year.

Congratulations to the race winners!  CLICK HERE TO VIEW RESULTS