Hunting Island's Lighthouse: Up you go, step by step

Climbing the lighthouse when visiting the beach continues to be one of our family’s traditions. It’s a delightful experience – full of anticipation for the view from the top.

At sunset on July 1, 1859 the Hunting Island lighthouse emitted its first beacon of light to mariners, protecting them from the perils of sandbars and treacherous currents near the coast. The lighthouse was fitted with a Fresnel lens, a giant beehive of concentric glass prisms that was so amazingly efficient that every 30 seconds the focused light from the simple oil lantern cast a beam 17 miles into the darkness.

“You know – one of these days we might have to move this thing. Let’s make it easy.”

So they constructed it out of cast iron plates that could be dismantled. And sure enough, in August 1887 a storm took away enough beach that the lighthouse stood only 152 feet away from the ocean. While it took two years to get the funding, eventually all they had to do was unbolt the steel plates, move the pieces on a tramway, and reassemble it a little over a mile inland.

(Not really. It actually took six months to take it apart and put it back together and the workers all had malaria but the lighthouse was successfully re-lit in October of 1889.)

My first memories of the lighthouse are far before people got smart, realized what a treasure it was, and started a campaign to protect and restore it.

As teenagers, of course, we spent our share of time at the beach and almost always climbed the lighthouse while we were there. It was great fun but at the time (1970s) the lighthouse was in a sad state of disrepair. The Fresnel lens was in the bottom of the lighthouse – broken, dirty, and neglected. Graffiti had been painted on the brick walls around it. 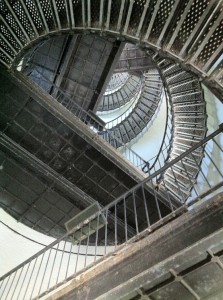 But climb we did. 167 steps all the way to the top. The last few stairs were a bit treacherous, given there was no handrail. We knew we were up high; we could hear the wind blowing through and around the lighthouse. Claustrophobics and those afraid of heights didn’t do well.

But, just as you can today, we stepped out through the steel door and were greeted by the most magnificent view of the ocean.

I don’t think I would have been a good lighthouse keeper. I complain about having to get up and let the dog out at night.

Climbing the lighthouse when visiting the beach continues to be one of our family’s traditions. It’s a delightful experience – full of anticipation for the view from the top, but it’s also a little unnerving. (As my Aunt Kay once said, “It scared me and I liked it!!) The steel steps are perforated with large holes so the higher you climb the farther you can see to the bottom of the lighthouse. You know you’re safe but it can still be a little intimidating. And because the lighthouse is just a big hollow brick and steel tube every sound is magnified and echoes. Climbing the lighthouse at night while listening to my brother and his friends make ghost sounds is an adolescent memory that’s pretty etched in my brain. Just thinking about it gives me the creeps.

Today, the lighthouse stands as the only publicly accessible lighthouse in South Carolina. You only have to pay a small fee and up you go, step by step, round and round to the top, where you can be treated to a bird’s eye view of the beach and catch a glimpse back to a time when a lonely lighthouse keeper on Hunting Island protected people he’d never met by keeping the light shining bright.