Thursday evening’s sold-out inaugural gathering of the ‘Supper Society’ brought folks together inside of Old Bay Marketplace for a dinner skillfully prepared by Chefs Brian Waters of Saltus River Grill, and Christopher Hewitt of Southern Graces.  Announced to ticket-holders only 2 days prior to the event, as per Supper Society rules, the original location was to be outside on the rooftop at Old Bay Marketplace in downtown, but Mother Nature changed those plans dropping a sizeable amount of rain across the area. 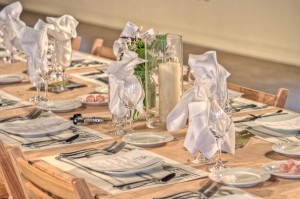 Attendees at the Supper Society gathering were treated to a delicious, on-site-prepared, gourmet dinner consisting of oysters on the half-shell, goat-cheese filled fried pie-topped salads, grilled local swordfish, and creamed corn grits.  With three diferent desserts served that included strawberry shortcake with Chantilly cream, and a mouth-watering sweet tea & pecan panna cotta.  With the event being a ‘BYOB’, there were plenty of ‘spirits’ among the Society members, and no shortage of a good time all-around.

The atmosphere was set for the night by a few members of the Beaufort Youth Orchestra, who performed throughout the event delightfully 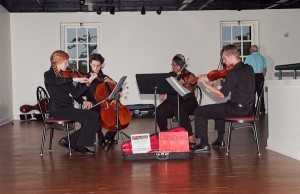 providing a very classical backdrop to the dinner party.  Guest servers at the event were students from LOUD, Inc.  LOUD (LivingOutUrDreams) is a Beaufort-based non-profit organization that utilizes media arts and performances to focus teens on components of success. Any gratuities that the students received will help pay for an upcoming trip to San Francisco to compete in HBO’s Brave New Voices series…an invitation was extended to the organization to participate on the HBO series, and the organization is in the midst of a fundraising campaign of it’s own.

Occurring 2-4 times per year, The Supper Society features a 4-course meal made of local ingredients prepared by 2 local chefs in a unique location. The guest Chefs will be made public as well as the main entree theme, but the full menu and location will only be revealed 2 days before the event to the people who have purchased tickets.

All proceeds of the event benefited preservation and revitalization efforts in Beaufort undertaken by both Historic Beaufort Foundation, and Main Street Beaufort USA.

Take a look at some more photos from the gathering… 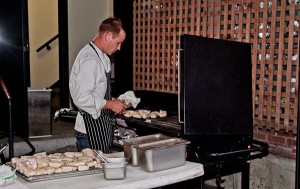