The John Mark Verdier House Museum is one of the most significant Beaufort landmarks and has a part in South Carolina’s long and storied history. Built in 1804, this magnificent home is a testament to the beauty of Federal style architecture. It’s located in the historic downtown area of Beaufort, on Bay Street. John Mark inherited his father’s estate in the 1700’s and became even wealthier by selling cotton in Europe. Verdier built a wharf and storage buildings for his ships on the waterfront, and then spent much of his money constructing his new home on the opposite side of Bay Street. The home was a show of status and wealth for him as he went from being a merchant to being a planter.

The interior shows examples of many fine architectural details, including an elaborate arch in the entrance hallway. This 3 storied structure has

black shutters that frame the large windows which are part of the Federal style of architecture, popular to the era. The tall columns lining the porch are classic and add extra elegance. There is a double set of entrance stairs leading to the main porch. The furnishings and accessories are exquisite period pieces that add to the authenticity. In fact, a number of the items there are actually original to the home. The private quarters for the family members have gleaming hardwood floors. At the top of the gracefully curved interior staircase is a large ballroom with a small adjoining area that ladies would use to refresh themselves during a party. 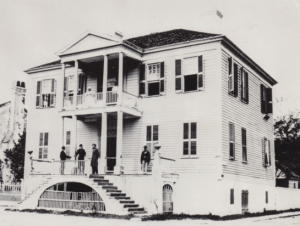 Perhaps the Verdier House’s most intriguing link to history is its connection to Revolutionary War hero  Marquis de Lafayette, who stayed at the Verdier House on the Beaufort leg of his 1825 U.S. tour. Despite the late hour of his arrival, a crowd gathered at the corner of Bay and Scott Streets, and the hero finally had to come to the house’s entryway to satisfy their desire for a speech.

When the Civil War came upon Beaufort in November of 1861, John Mark Verdier was among the Beaufort residents that fled their homes and fortunes. His magnificent house

became the Union headquarters in Beaufort. By the time the war was over, like many of the Beaufort residents that fled, John had lost his fortune. The Verdier family was able to purchase the home back from tax auction after the war. It remained a commercial property after that until the time it was restored in the 1970’s and opened as the John Mark Verdier House Museum in 1976.

Today the home is maintained by the Historic Beaufort Foundation and can be seen weekly as part of a tour. The home is set up ‘in period’ and has been brought back to one of its original colors. It was listed on the National Register of Historic Places in 1971.

Stop in and see what it felt to be in Beaufort 200 years ago. The Verdier House Museum is open from 10am to 330pm, Monday through Saturday. There is a wonderful Civil War museum housed in the bottom floor of the home, and it’s also a beautiful example of tabby architecture.