It's a Candice Glover Wednesday in Beaufort

Wednesday’s have taken on a whole new meaning across the Beaufort area as local Candice Glover continues to wow fans across the country on her way to the top on American Idol.  Today we get some expanded coverage on Beaufort’s support for Candice as Columbia, SC’s WACH-TV FOX 57 show host Janet Parker will be in Beaufort all day gathering footage at several locations throughout the area and interviewing Beaufort locals about Candice, ending the night at the Candice Glover Watch Party at The Irish Rose Pub & Bistro in Beaufort Town Center.

On tonight’s show, Candice will again sing for your votes on the two-hour episode beginning at 8pm on Fox, as the Top 5 contestants will be performing two songs each, including a song from a ‘Diva’, and a song released in their birth year.

After a mind-blowing, America-wowing, performance of the ages last week with The Cure’s ‘Love Song’, this week Candice will sing ‘When You Believe’ by Mariah Carey & Whitney Houston, and ‘Straight Up’ by Paula Abdul.

Here’s what each contestant has selected for tonight’s show:

Tonight should be another stellar performance for St. Helena’s favorite girl.

The results show will be from 8 to 9 pm on Thursday. One contestant will be eliminated every week until the finale.
After the performance, don’t forget to vote all night long by going to http://AmericanIdol.com/vote and light up those cellphones too.  Find out the number to call after of each her performances, and look for updates on Eat Sleep Play Beaufort’s Facebook page. 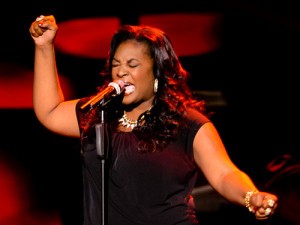