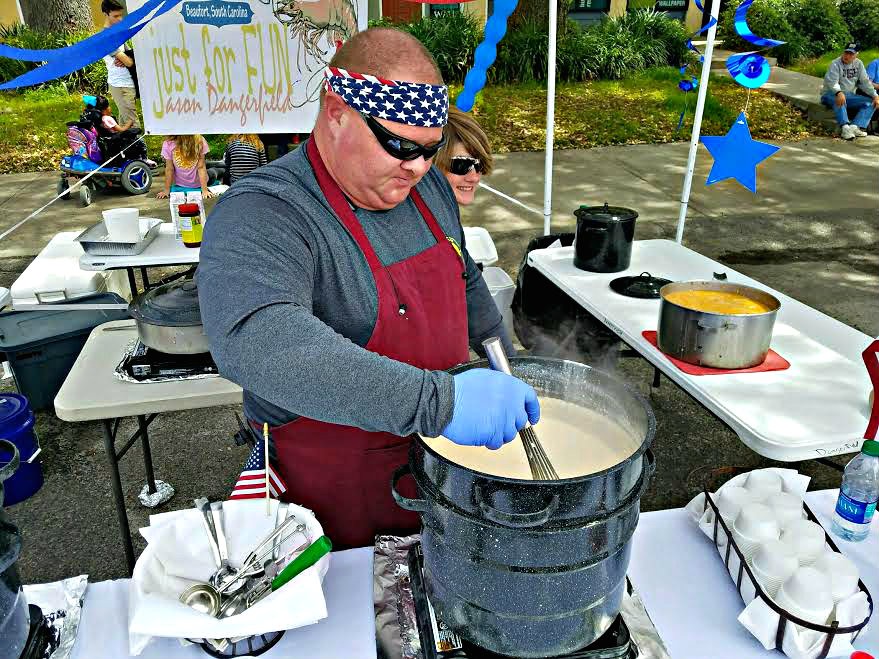 For the second year in a row, Jason Dangerfield of Cooking Just for Fun took home Bridges Prep’s trophy last Saturday for the best shrimp and grits recipe at the fourth annual Bridges Prep Block Party presented by Ameris Bank.

Eat Sleep Play Beaufort sponsored the shrimp and grits cook-off and served as the event’s media sponsor. The Parent-Teacher Organization for Bridges Prep put months of work into making the event a success as their primary fundraiser for the state charter school.

“It was an amazing day of good food, good fun and good friends coming together,” said organizer Amy Painton, vice-chair of Bridges PTO. “The weather was perfect, our chefs all had different approaches

to the Lowcountry tradition of shrimp and grits, and I hope everyone who came had a great time.”

For Dangerfield, cooking is an adventure, every dish a new discovery.

“My recipes are always different,” he said. “I don’t ever cook the same meal twice. I look at recipes as broad suggestions. I really don’t believe there is any magic in exact quantities or ingredients — with anything I cook, it is always top notch ingredients, lots of love and creativity.

So what is the secret of his success at the Bridges Prep Shrimp and Grits Cook-off?

“As with all cooking, starting with great ingredients such as fresh shrimp and being creative with how you put things together and tasting a lot along the way,” Dangerfield said. “Oh — and butter lots of butter and heavy cream.”

Working beside him at both cook-offs has been his daughter Lily, an eighth grader at Lowcountry Montessori who’s headed to Beaufort High in the fall. “Lily helps keep me reminded that cooking should be fun and she helps keep the events entertaining. She also did our decorating this year with a patriotic theme.”

Dangerfield also learns by tasting lots of other recipes. For instance, at this year’s Bridges Prep Block Party, he made a point to try what others were cooking.

“I tasted a lot of the dishes this year and there was some great competition this year. One that stood out was Jason from the new Smokehouse Restaurant in Port Royal,” Dangerfield said. “He had the booth next to us and he had a great Shrimp and Brown Gravy dish. He and I had a great time cutting up. Having fun and cooking and getting to make new friends like him is what it’s all about.”

For the event, Sea Eagle Market donated fresh shrimp for the chefs and Piggly Wiggly donated the grits for the Cook-Off. Bridges Prep’s Parent Teacher Organization (PTO) produced event and it is the key fundraising event for Bridges.

Originally from Moncks Corner, SC, Dangerfield and his wife moved to Beaufort in 1996 with the Navy. Most of his catering is done to help non-profits raise money. To reach him, email him at dangerfieldinc@yahoo.com.

Bridges Preparatory School was chartered by South Carolina in mid-2012 and opened at near capacity in August 2013. Since then, enrollment has grown steadily with almost 600 students enrolled in K-9 this year. For the 2017-2018 school year, Bridges Prep will expand to tenth grade and in two years will be a full-service K-12 state charter school.