The Town of Port Royal has released this spring’s season schedule for Street Music on Paris Avenue, and it sure looks like we’re in for a great deal of top-notch entertainment once again. Over the past several seasons, thousands of locals have enjoyed the free concerts that are situated right on the street…Paris Avenue, in Port Royal.

Growing in popularity and becoming a much-anticipated event, Street Music brings in quality national and international touring musicians of all genres for a FREE community concert right in the heart of Port Royal, SC.

Four concerts are held from May through June, and also four concerts from August through September each year.  All concerts start at 630pm. 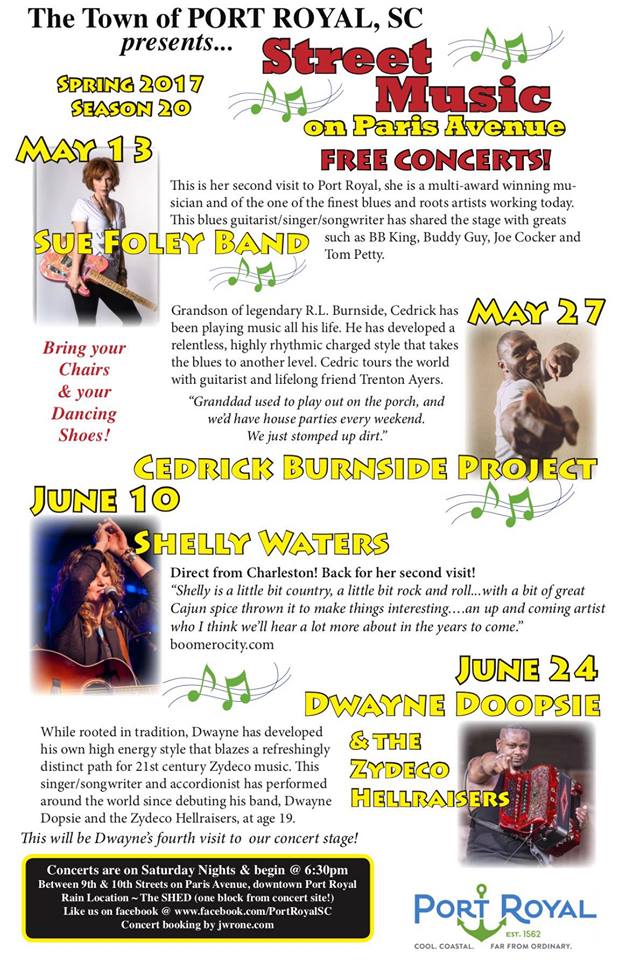 Here’s some info about the fabulous acts we’ll be seeing this spring season.

Sue Foley started her professional career at sixteen. By twenty-one, she was living in Austin, Texas and recording for Antone’s, the blues label and historic nightclub. Foley has toured steadily with her band, toting her signature pink paisley Fender Telecaster. In 2001, Sue won the Juno Award for her CD, Love Coming Down. Foley has also earned seventeen Maple Blues Awards and three Trophees de Blues de France. She has also garnered several nominations at the International Blues Music Awards in Memphis, Tennessee. She’s shared the stage with B.B. King, Buddy Guy, Joe Cocker and Tom Petty. This is her second visit to Port Royal.

The son of Rockin’ Dopise, Sr., a pioneer of Zydeco music, “America’s Hottest Accordion” winner, Dwayne Dopsie plays a unique, high energy style of zydeco. Dwayne hails from one of the most influential Zydeco families in the world. Although inspired by tradition, he has developed his own high energy style that defies existing stereotypes and blazes a refreshingly distinct path for 21st century Zydeco music. This singer/songwriter and accordionist has performed all over the world since debuting his band, Dwayne Dopsie and the Zydeco Hellraisers, at age 19.

Described as tailgating for grown-ups, Street Music in Port Royal isn’t just about great music; it’s the friendly feeling of community you get just from being there. Grab some friends, a cooler full of your favorites and your dancing shoes and plan to have a great time.