It’s another night of BBQ, live music dancing and fun. The Junior Service League of Beaufort will host its 10th annual fundraiser barbecue on April 18th at the Old Bay Marketplace and Rooftop Deck on Bay Street in downtown Beaufort from 6 to 10pm.

The barbecue, “Rockin’ on the Rooftop,” will feature music by The Bull Grapes, barbecue with all the fixings from Carolina Tavern,  an Open Bar, cornhole, a raffle for a Yeti cooler, and a silent auction featuring house plans from Allison Ramsey Architects, a round of golf for four on Dataw Island, Kate Spade purses and more.

Tickets are $40, which includes all the barbecue and fixings you can eat and an open bar. Tickets can be purchased from any JSLB member, by phone at 803-308-1429 or online at www.juniorserviceleagueofbeaufort.org.

Event proceeds will be distributed back into the Beaufort community through a formal request-for-funds process, in which JSLB selects non-profit agencies that complement our mission to support and enrich the lives of women, children, and families in our community.

Last year, the league distributed more than $8,500 in funds from the fundraiser proceeds. The 2014 JSLB grant recipients were: 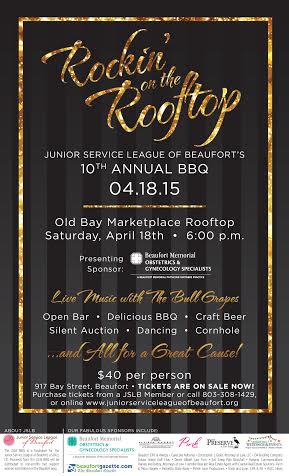 JSLB is a nonprofit organization founded in 2005 dedicated to supporting and enriching the lives of women, children and families in our community. The league has donated more than $100,000 to area nonprofits since its founding, and league members regularly volunteer at organizations such as Child Abuse Prevention Association and Citizens Opposed to Domestic Abuse.
Members in the Junior Service League of Beaufort volunteer weekly at both Citizens Against Domestic Abuse and the Child Abuse Prevention Association. Members also host an annual blood drive in the winter and a free prom dress boutique in the spring and participate in several social events throughout the league year.

For more information, please visit www.juniorserviceleagueofbeaufort.org, email jslbft@yahoo.com or find us on Facebook at www.facebook.com/JSLBFT.