By Cindy Reid | When I asked Kirk Dempsey of the wildly popular Beaufort band The Bull Grapes if I could interview him for a piece on eatstayplaybeaufort.com, he said “Well, if you don’t reckon folks are sick of me yet.”

The Bull Grapes have gained a huge local following, with an incomparable sound that that Kirk calls “Salt Water Soul”. Most recently they played at The Old Bull Tavern’s Mardi Gras party and well, they TORE THE PLACE UP! Don’t fret if you missed it, they play at Q on Bay every Thursday from 8-11 pm, and will be appearing at many venues throughout the next few months.

Being the good sport and friend that he is, the Big Man graciously answered a few questions for me. 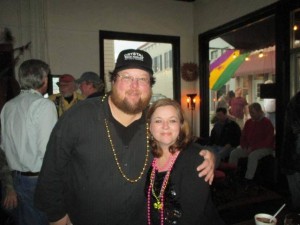 Where were you born and raised?

I was born at Beaufort Memorial Hospital and raised in Frogmore, S.C. My birth certificate has ‘care of Woods Grocery’ on it for an address.  (Woods Grocery was a local store on St. Helena Island)

Your favorite music as a kid?

Led Zeppelin and AC/DC. Me Mum bought me ‘Highway to Hell’ for Christmas when I was a lad. She is a swell Mum.

What did you want to be when you grew up?

Who are the members of The Bull Grapes?

What is your favorite thing about playing music? 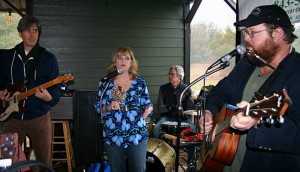 When people dig what we are putting down, and go home happy.

What is your favorite thing about Beaufort and St .Helena Island?

What musicians do you most admire?

I admire a whole bunch of them. But, as of late, I dig T-model Ford, R.L. Burnside, Junior Kimbrough, and Cedell Davis because they were not scared to bring what they had. They allowed me to throw caution to the wind, and just play.

How did you meet your lovely wife Elaine?

I met Lainey in high school (Beaufort High, 1985). She had the cutest little bum, still does. I’m fortunate.

How many kids do you have- and their names?

We have three daughters. Sarah, Caroline, and Madison. All very successful in their own right.

How long did you live in Atlanta and when did you move back?

I would like to thank the people of Frogmore, Beaufort, and all over, for allowing The Bull Grapes to play so much the last two years. It has been great. See y’all further on down the road.

Well… you just gotta love a guy who cites Momma’s cooking as a fav.  We’ll see you further down the road, Kirk and crew – we will certainly be looking forward to it! 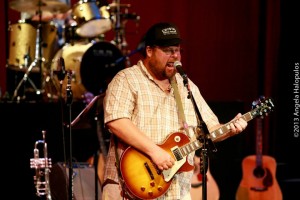