If there ever was a city to eat your way through, it’s Beaufort.

Home to scores of mom and pop restaurants, grabbing a table is like grabbing a chair at home. It’s also November, and colder weather means heartier meals – which also means fuller (and happier) stomachs! Check out the places we are treating out palettes to this month: 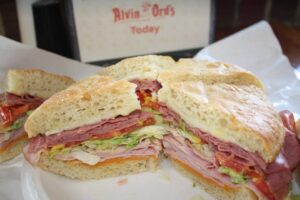 Sandwiches come in three sizes at Alvin Ords.  Big, bigger and oh my!  Whether it’s a roast beef and turkey, a pastrami, or a reuben, it’s piled HIGH between the buns at Alvin’s. Our pick?  The Salvation. A true original. Take cheddar, mozzarella and parmesan cheeses and toast them into the bun, then add salami and ham with all the fixins. One of the few places where you’ll be saving the other half of your lunch… for dinner. 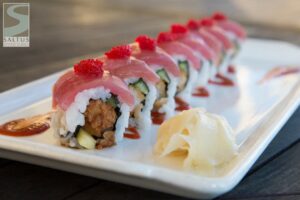 America has become a sushi nation. Sushi has become known as a quick and healthy lunch option, served in college food halls, and even sold in plastic trays at convenience stores. Saltus River Grill in downtown Beaufort is a fine spot to enjoy it. We recommend the Watermelon Roll, consisting of Tuna Sashimi, Cucumber, Avocado and Carrots, over Wakame and topped with Yuzu. No sauce is needed when enjoying the sushi at Saltus. It’s as fresh as can be. 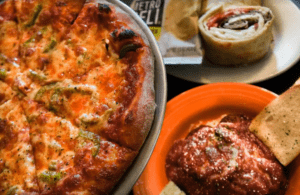 Feel good about your decision to eat pizza when it comes to The Upper Crust. Lots of great choices await the discerning foodie here. Specialty pizza varieties run the usual gamut — Meat Lovers and Veggie — but also include the Frogmore with shrimp and sausage and the Cast Net. An indulgent offering is the House Special layered with pepperoni, sausage, mushroom, green pepper, onion, black olive and extra cheese. It’s not thick or heavy-crusted pizza, so it won’t fill you up like the chains will. Veer off track a bit and try a grinder. Our favorite… the steak wrap. 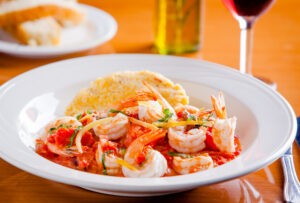 Shrimp and grits is one of those iconic Southern dishes that stirs something deep inside. To a Southerner, eating grits is practically a religion. To a Beaufortonian, eating shrimp is more or less a God-given right. Add a little spice and put the two together on a table sitting in the open atmosphere over at downtown’s Panini’s on the Waterfront and you’ve got a great dish. Using fresh local shrimp prepared perfectly with pancetta polenta, onions, olives, tomatoes and more, Panini’s own spin on this classic southern dish is something special.