By Cindy Reid  |   Now I know what I want to do with my life. I want to be a professional chicken wing judge. Thanks to Janie Lackman and the wonderful folks at Friends of Caroline Hospice I was asked to be a “guest judge” at the Bands, Brew & BBQ fundraiser recently held in Port Royal. I had been asked to participate last year but was out of town during the event, so when I was called this year I was relieved I hadn’t blown my chance permanently and accepted with an almost frightening enthusiasm. I don’t particularly love chicken wings, nor am I a very big fan of cooking shows and food competitions. There was just something appealing about being a “guest judge/chicken wing category” and I am happy to report that the experience more than lived up to my high expectations!

First of all I was delighted to learn that the judges had to come a half hour early to receive judge training conducted by Garland Hudgins, a South Carolina Barbeque Association Judge from Columbia, SC. Mind you our “ Wing Throw Down “ was not an official SC sanctioned event, that would take place the next day with ribs and pulled pork. But we were adhering to the same criteria and each table would be judging five different wing offerings.

We were broken into groups of six and I was honored to sit with the Mayor of Port Royal, Samuel E. Murray, Janie’s grandmother, Beek Webb and Port Royal Council Members, Tom Klein and Joe Lee ,who was our table Chairman. Containers of wings were labeled with code numbers, making then anonymous, which was a good thing because if you knew some of the contestants (which we probably all did) it would be hard to not want to give them an extra point or two!

The wings were graded on factors of appearance, taste, originality, and two other things I don’t remember. I did hear in case of a tie that “taste” would outweigh “appearance” which seems fair. In any case my table got right to work passing around containers and filling out our ballots. Cheerful volunteers from Friends of Caroline Hospice were on hand to bring us bottles of water and other beverages (of the adult nature) and anything else we needed.

The whole event took about an hour, which was minimal compared to the amount of time I had spent talking about it all week, and I could have happily spent another hour judging food-any food! I was feeling a little sad that it was all over until I saw the “grazing table” of all the leftover wings, over 30 different offerings, and I quickly joined my fellow judges in sampling more wings, free of judging duties.

After grazing, Kip and I walked around the event and we met a lot of the contestants and enjoyed music from Kurt Dempsey and the “Sidestreet Walkers”. I am a tad embarrassed to report that I left my guest judge name tag prominently affixed to my sweater for all to see, but I did. I ate more wings, and then some more wings, and then I ate a chocolate chip cookie dough ice cream. It was grand.

Thank you Friends of Caroline Hospice for the fine fundraiser. Thank you for making our community brighter and better. It was honor to be part of your good works, even if just for a few hours on a rainy Friday night in Port Royal. Lowcountry life, there is nothing finer. 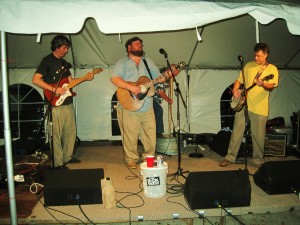 “Lowcountry Life” is where you will find the little stories, the nooks and crannies of life here in the lowcountry. Five years after relocating here I remain unabashedly infatuated with Beaufort and the Sea Islands. I can always find new places to explore, new friends to meet and new experiences to try. I will be sharing these stories through this column, because passing on the good stuff is what life here is all about Thank you for taking a look. A writer needs readers and every single one is appreciated.