By Cindy Reid | If it’s cooler in Beaufort whether it’s fall or winter….it’s the season for that most favorite of Lowcountry events; the ever-popular Lowcountry oyster roast. Oysters grow on many of our waterways and are generally thought to be in season only during months that have an “R”  (September, October, November, January, February, March….you get the idea ).

Oyster roasts traditionally take place outside where the fresh clean oysters are cooked on a banked fire, usually on a large metal tray under a wet burlap sack.

When deemed “done” they are shoveled ( literally) onto a table and it’s time to dig in! They are going to be hot but all you need is a cloth or glove to hold the shell and an oyster knife to open it.

Nothing, and I mean nothing, tastes the same as a fresh local Beaufort oyster.

Oyster Roasts: It’s what we do here in the Lowcountryand winter seasons. Attending an oyster roast is a great way to support our local charities and businesses.

Oyster roasts are a part of our community. It’s what we do.

It’s traditions like this that make living here so special. It’s the connection between the water we live on and the food on our table. And even more so, it’s the connection between us, our neighbors, family and friends as we stand around in our jackets, laughing, talking and enjoying one of the most unique and delicious  experiences to be found right here in our own back yard.

Go ahead, grab an oyster and enjoy.

And, please don’t miss these fantastic Oyster Roast fundraisers typically found throughout oyster season here in Beaufort. Each is lots of fun, and for very worthy local causes… 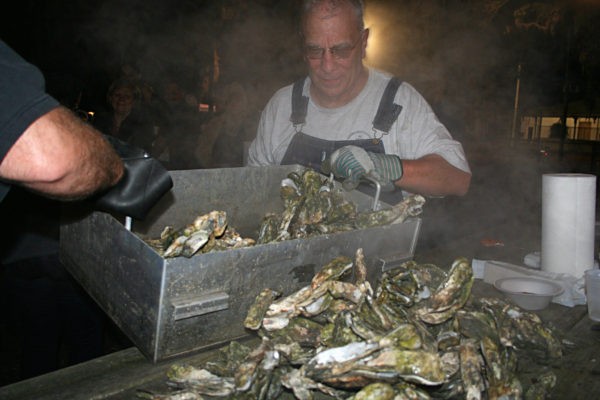