By Anna Schaffer | As the world celebrates William Shakespeare’s 450th birthday this week, local theatre company Shakespeare Rep, brings his most cursed play to the stage at the University of South Carolina Beaufort’s Center for the Arts.

A cast of 17, including those young and old, seasoned and newcomers, take to the stage to bring to life the haunting story of a power-driven man and his wife, the instability that comes to both along their campaign for autonomy and those in their path of destruction. Director, and founding artistic director, Debra Charlton, whose resume boasts a PhD in Shakespearean Performance and a selection for performance on the Dell Stage of the Royal Shakespeare Company in 2011, brings an expertise to Macbeth that will leave you peeling back the layers of all that this tragedy has to offer.

Seasoned actor, Santiago Sosa takes on the role of Macbeth. Sosa holds his MFA from University of Wisconsin and toured some of the 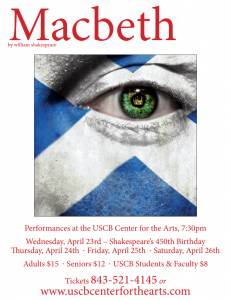 most highly esteemed classical theatres in the country. While he brings such character to Shakespeare’s lines, his raw emotion and connection with the tragic tyrant will leave you wanting more. His take on Shakespeare’s famous ‘asides’ will leave you feeling that you are the only one in the entire theatre, and Macbeth is divulging his most inner thoughts, to you, and only you. The combat scenes feature the athleticism of Sosa and others in the cast, taking the audience on an exciting and thrilling journey.

Of course we know, behind every great man, is a great woman, and Erin Daily, truly delivers as Lady Macbeth. Her passion for her husband and for power are immediately conveyed in her early monologue. Strongly delivered at the end, her infamous obsession with the “damned spot,” leaves you feeling slightly unnerved as her perfect blank stare and obsessive hand washing conveys the devastating instability of her existence.

Those in the path of Macbeth and his devout wife, include three eerie witches (Hannah Brown, Christine Grefe, Mary Ann Browning Ford) that predict the rise and fall of Macbeth, MacDuff, (Michael Weaver) who suspects Macbeth of regicide, Banquo, (Bill Dalton) a once ally and friend of Macbeth, and later a conquered foe, and the loyal, and at one point, comic relief, Seyton (Michael Kane). Duncan King of Scotland (Bob Herrick) and his two sons, Malcolm (David Helmer) & Donalbain (Noah Westman-Barth), Lennox (Dave Falls) & Rosse (Travis Marshall Hornsby) both Scottish noblemen, the doctor (F. Kwame Johnson) a handful of murderers (Jeff Evans & Jess Goff), make critical entrances and exists in the life of Macbeth, giving the audience a ride of a lifetime. A couple of young actors appear onstage as well including Lilliana Larew, Zachary Hobbs & Jacob Dalton.

Haven’t sold you yet? Pair the incredible local talent with the lighting effects, modern elements and creative costuming and what you get is a wickedly perfect performance. It is one show you won’t want to miss.

Performances run April 23, 2014 – April 26, 2014 at University of South Carolina Center for the Arts beginning at 7:30 PM. You are invited to join the cast of Macbeth following the performance on April 23 for a celebration of William Shakespeare’s 450th birthday. Tickets can be purchased online at www.uscbcenterforthearts.com or by calling 843-521-4145. Adults $15, Seniors $12, USCB Students & Faculty $8. 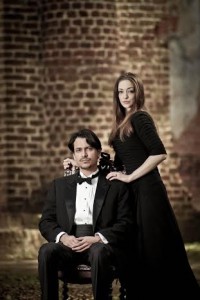