By Tess Malijenovsky |  There’s no place in Beaufort to pick up your spirits quite like Bill’s Liquor & Fine Wine. Boasting the best selection of liquor, wine and beer at the best prices by the friendliest staff, locals simply can’t find a more progressive store in the radius that compares to Bill’s. But before Bill of Bill’s Liquor ran a liquor store he ran a grocery store, tells his son Doug Massalon.

“We used to cash a lot of pay roll checks and the guys always said, ‘Hey Mr. Bill why don’t you open up a little liquor store next door?’ And my father said, ‘Nah, I don’t want to be in the liquor business.’” This was a little over 30 years ago. “The guys” talked Bill into opening a liquor shop attached to the store. 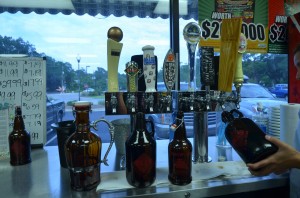 Doug and his brother grew up meandering the lanes of liquor at an early age and eventually, after making it on their own for a while, joined their father in owning and running the business. A connoisseur of bourbon and scotch—Doug’s choice liquor—he set out to find a bourbon similar in taste to Woodford Bourbon that wasn’t almost $50 a bottle. After a long, unsuccessful search, he decided to make his very own, and called it Spring House.

As far as the wine and beer, Doug made it a goal to be knowledgeable. “I was always more of a Bud Light/Miller Light type drinker. I tried a couple of imported beers and just didn’t like them,” admitted Doug. Then everything changed for Doug when he tried Highland Brewery’s Oatmeal Porter, a robust dark beer with a smooth hop flavor. “It was great, just out of this world. It’s one of my favorite beers still.” His affinity for quality beers influenced the town.

Bill’s Liquor store is unique to the area for its Growler Station. Customers can make a one-time purchase of a growler (brown glass bottle) in three different sizes. Then they can come in when they’d like to fill up their growler with a revolving selection of draft beers. Aside from being the most environmentally sustainable way to drink alcohol, draft is the best tasting beer: “Honestly, when it comes to microbrews, craft beers or imported beers, draft is your freshest, cleanest, crispest tasting beer on the market.”

These specialty, high-gravity beers are brewed in smaller batches by smaller breweries, unlike the mass-produced domestic. “Usually you’ll find anything that’s more small business type spends more time and cares more about the product overall.” The small business of Bill’s Liquor & Fine Wine doesn’t only pride itself in its selection and customer service, but in giving back to its community every year through sponsorships of local fundraisers.

Outside of work, Doug has also volunteered for a water rescue team. Growing up by the water and years of training in the Coast Guard, Doug likes to help out if he can.

So go ahead, cheersing a beer for local business never felt more appropriate.