By Anne Christnovich | You won’t find Nick Borreggine’s name on the façade of a library, a park or a hospital wing. He isn’t that kind of philanthropist. But you don’t have to be in Beaufort for long to find a laundry list of contributions he’s made to the community.

Borreggine, who opened Panini’s in 2001 and the gourmet burger joint Fat Patties in 2012, sees giving back as a natural thing to do.

Perhaps his most publicized contribution is through the ‘Community Give Back’ held at Fat Patties each Tuesday, in which Borreggine donates 10 percent of sales to a various nonprofit and educational organizations. Since the Community Give Back started in February, Borreggine has written checks totaling $7,284 — an average of about $250 a week.

The idea for the Give Back started when Borreggine decided to hold a fundraiser for the local organization HELP of Beaufort in late January. Rep. Mark Sanford and other public figures waited on patrons and Borreggine got to write a check to the group, which coordinates area churches to provide various emergency services for people in need.

“It felt good to write that check,” he said.

Now, Borreggine has organizations booked three months in advance and has more than 100 other groups waiting to get their Tuesday 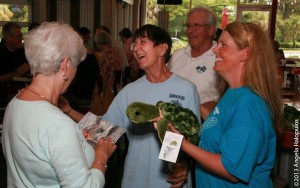 at Fat Patties. “I knew it was going to be popular but it took, like, three days to get all the requests into a spreadsheet,” he said. For every fundraiser he has, Borreggine said he gets an average of three more requests.

He asks only that groups be not-for-profit and that they have members available at the restaurant to answer questions and provide information about their cause.

In addition to giving away money, Fat Patties gives a free meal to military and civilian first responders (police, ambulance, and firefighters) on 9/11 every year.  Last year, the first for the giveaway, Fat Patties served over 40 meals.

Borreggine, 40, and his wife Michele moved to Beaufort from Philadelphia in 2000 to open Panini’s. Originally, he was going to put his restaurant on Hilton Head Island but decided to put it in Beaufort after recognizing a hole in the market. “We went and ate at Plums and then there was Blackstones,” he said. “After that, there really wasn’t anywhere else to go.”

While Beaufort has grown, Borreggine said he’s always loved the area for its seafood, nature and the water. “It’s great to be out and 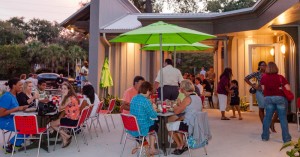 fishing 20 minutes after you get done with work,” he said.

Borreggine sold Panini’s in 2011 and opened Fat Patties in August of 2012. He runs it with his father and stepmother. Michele cares for their three children, Hannah, 5, Brianne, 5, and Walter, 4, while also helping out at the restaurant.

For years now, Borreggine’s role has had more to do with spreadsheets and budgets than chef’s knives, but the restaurateur has a culinary degree from Johnson & Wales University in Norfolk, Va., and has cooked at several award-winning restaurants. One of those jobs included an apprenticeship under executive chef Patrick O’Connell at Virginia’s top-rated The Inn at Little Washington.

Fat Patties serves up delicious, unique burgers and brats, but Borreggine said he’s not trying to run a five-star restaurant. Instead, he took certain elements of gourmet restaurants and brought it to his burger business. While the idea of local farm-to-table ingredients is somewhat of a trend, Borreggine has always selected local ingredients and sees it as the natural thing to do.

It’s also another, subtler way he gives back to the Lowcountry.

not a trend, it really should be a lifestyle,” he said. “Most of the time it’s cheaper and it always tastes better. … It’s also good to keep the money local.”

He also gets local produce whenever possible and carries a handful of local and regional beers and whiskeys. In fact, having an ever-changing selection of craft brews is a gamble Borreggine took with Fat Patties. But he couldn’t be more delighted with the results.

“I was pleasantly surprised with how much people have accepted our beers,” he said. Borreggine orders only one keg at a time to keep the selection interesting and new.

It sure doesn’t hurt that Borreggine is something of a beer connoisseur himself and happens to have the job of taste-testing each different kind.

“I have 2 ounces of beer every morning,” he said laughing. “It’s a hard job.” 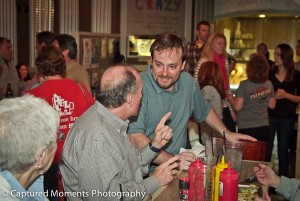