'Skully' the injured sea turtle to be released back to sea

A happy ending to a story from earlier this summer, Skully the injured sea turtle is being released back into the ocean this weekend.  You may remember Skully’s story from June, when the Loggerhead turtle was found in Skull Creek off of Fripp Island and was sent off to the Sea Turtle Hospital at the SC Aquarium by volunteers from the Fripp Island Turtle Team and other witnesses.

In a release issued by the SC Aquarium, it was announced that three sea turtles successfully rehabilitated by the South Carolina Aquarium Sea Turtle Rescue Program are ready to return to the sea. One green sea turtle, Crosby, one Kemp’s ridley sea turtle, Parker, and one loggerhead sea turtle, Skully, will be released at the Isle of Palms County Park in Charleston at 10 a.m., this Saturday, September 14th.

The release is being held in partnership with the South Carolina Department of Natural Resources (SCDNR) and the Charleston County Parks and Recreation Commission (CCPRC). The public is invited to join the festivities and are encouraged to carpool, arrive early, and are reminded that parking fees apply at the county park.

Skully, a 70-pound juvenile loggerhead was found by canoers stranded on a sandbar in Skull Inlet near Fripp Island in June. When Skully was admitted to the Aquarium’s Sea Turtle Hospital, biologists discovered old wounds to his/her plastron which were inhabited by marine leeches; the turtle was also thin, lethargic, anemic, and dehydrated. The leeches were flushed out of the wound, and supportive care was administered.

Skully is now back to optimal health and is ready for a return to the open ocean.

Here’s a photo of Skully when she was found off of Fripp Island. 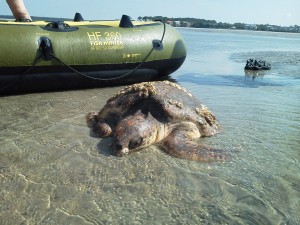