Aunt Pearlie Sue is the creation of Anita Singleton-Prather, a native of the Sea Islands in Beaufort, South Carolina. Based on her grandmother, Aunt Pearlie Sue’s character has entertained audiences with Gullah-flavored folktales for over 20 years from the schoolhouse to the White House.

In addition to being a renowned master storyteller, Prather is an educator, historian, business woman, writer, singer, actress and director/producer. She is the founder and artistic director of the musical performance group the Gullah Kinfolk. As a storyteller and singer, Prather has performed at many festivals, the Beaufort Gullah Festival, Penn Heritage Days Festival, Woodlands Festival and Spoleto USA international arts festival in Charleston, SC just to name a few . Her original movie, My Man Done Wrong, has been a part of the film festival circuit to include the Jamerican Film Festival in Kingston, Jamaica; Black Hollywood and San Francisco Film Festivals in California. She has appeared in the Hollywood film Forrest Gump and also on television Food Network Channel Holiday special, Christmas Across America, hosted by Rachel Ray.

In addition to her participation in many SCETV educational documentaries, Prather’s one-woman show, Tales from the Land of Gullah, has been broadcast on PBS nationwide and is also the title of her award-winning DVD and a traveling museum exhibit created around her animated character. This exhibit originated at the Children’s Museum of Houston, Texas in 2007 and has toured for three years throughout the United States and Canada in the top nine children’s museum. It was estimated that at least a million young people were introduced to the Gullah culture through this interactive exhibit. She is also co-producer, writer and featured storyteller on three Gullah CD’s and six DVD’s. She has partnered with South Carolina Educational Television to create an interactive website on their children’s Knowitall.org/gullahnet that also features her animated character.

Prather, a mother of 3 and grandmother of 7, is also the curriculum coordinator for the Education of Gullah Culture through the Arts in the Beaufort County School District. She holds a bachelor’s degree in psychology from Howard University and a master’s + 30 degree in education from the University of South Carolina. She is a member of New Covenant Fellowship International Ministries of Beaufort where she has been ordained as a licensed minister of the Gospel. She serves as worship leader and trustee board member.

Through her Gullah heritage, Prather continues to be a “keeper of the culture,” creatively entertaining and educating audiences around the world of all ages and nationalities about the rich unique African experience in America. 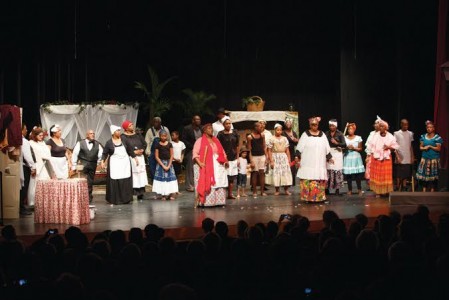