By Anne Christnovich | An elderly yellow dog with a red collar lays on the cool linoleum floor of Tallulah Trice’s office. The dog lounged comfortably while Trice worked on some ideas to revise the county’s pet licensing rules, and it was easy to assume she belonged to Trice, or at least lived at the Beaufort County Animal Shelter at 23 Shelter Church Road.

“I have no idea (who that is),” she said. “She was found in the Burroughs neighborhood.”

Trice, who has been rescuing and transporting animals since 1996, was hired as director of the shelter by county administrator Gary Kubic in March 2012. Since then, the department’s offices and protocols for taking in animals have been torn down by Trice and slowly rebuilt by she and her staff.

In less than 18 months time, Trice and her team had slashed euthanasia rates by more than half and have transported between 2,000 and 3,000 animals from the Beaufort shelter to no-kill facilities in Hilton Head and all over the South- and Northeast.

“Live release’ is at almost 70 percent for the year,” Trice said. “It means most of the animals are either adopted, reclaimed or 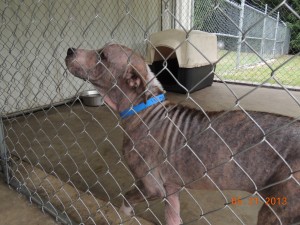 transferred.” Perhaps the most visible change to the public is the shift in focus from adoption to transportation. The shelter’s goal is no longer to make on-site adoptions, but place animals in areas of demand.

“Instead of focusing on adopting, we focus on health and quarantine,” she said. Most of the dogs and cats they receive need to be spayed or neutered, or they have fleas, hair loss, heartworm, or other problems. Some stay at the shelter for months before they’re healthy enough for adoption, according to animal shelter staff person Alice Schmett.

Unlike many other shelters in the area, which don’t accept certain species or have space limits, Beaufort County Animal Shelter has to accept all animals that are dropped off – or sometimes even dumped – on their property. Schmett, who has worked for the shelter for about two years, said they get reptiles, birds and other animals in addition to dogs and cats.

Money from grants and partnerships with shelters like the Hilton Head Human Society allow Trice and her staff to spend more time and money on nursing animals back to health.

On Monday [of that week], an area called “Alice’s room” was full of dogs waiting to be transported. Schmett is the only person who works in that 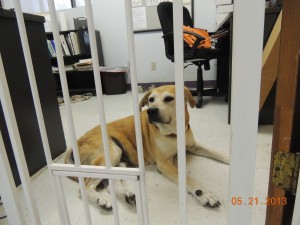 room, medicating and socializing with the dogs until they’re ready to take a trip to no-kill shelters.

Among the dogs, two hound puppies yipped and wrestled. At the sight of Schmett, they wagged their tails so vigorously their entire bodies wiggled. Schmett said when they received the pups four months ago, they were nearly hairless from fleas and mange and were underweight. The pups, Trice said, are a perfect example of how the new system should work.

“They would have been put down before,” Trice said.

As of Thursday [of that week], the pups, along with 19 other animals, were taken to a no-kill shelter in Fort Lauderdale, Fla.

“It’s rewarding to see them come in like that and in then months later to see them healthy,” Schmett said of the hound pups. “(Trice) has done a tremendous job.” Schmett worked and volunteered at the shelter for nearly three years before Trice stepped in as director. She said between 70 and 80 percent of incoming animals used to be euthanized — essentially dogs and cats were put down if they didn’t come into the shelter in perfect health.

Now, Trice said only about 30 percent of animals are put down and the decision to do so is made only if an animal is too aggressive to work with or too sick to be rehabilitated.

Tabby House was created through donations and, Trice said has previously, does not use any public money.

The animal shelter staff has also made a push to curb the feral cat population in Beaufort County. 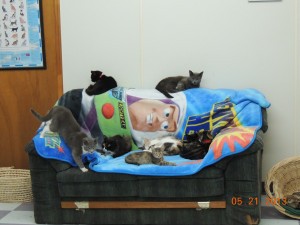 Feral cats, which are born wild but have domestic ancestors, are a common sight throughout the county. Few realize how drastically the population has increased, particularly after last years’ mild winter, Trice said.

Their numbers are high enough, she said, that the shelter’s rate of euthanasia might much lower if feral cats weren’t included in those statistics. They often have to be euthanized because feline AIDS, leukemia and other deadly and contagious diseases are common.

Getting the feline populations under control requires many wild cats to be put down, but Trice said her staff, the Hilton Head Humane Society and volunteers are putting most of their energy and resources into stunting reproduction through spaying and neutering.

“You can’t euthanize the problem away,” Trice said. “To alter a feral cat – to test (for disease), vaccinate, microchip, spay and neuter – all costs about $100 for each cat. …We spay or neuter at least 15 cats a week for free.”

She paused and did some quick math on her iPhone.

“That would have cost the county about $100,000,” she said. Instead, those procedures were funded through the Hilton Head Humane shelter.

In all, both shelters have worked together to spay or neuter more than 2,000 animals in the past year.

“They say it takes three years to see a decline (in feral cat populations), but I think we’re already seeing one,” Trice said.

The shelter also provides vouchers for people who can’t afford to vaccinate, spay or neuter their pet. Daily posts are also made of Facebook to alert the public to lost dogs and cats. Trice said “more often than not” the crowd sourcing leads to the animal finding its way home. The posts also ask for pet supply donations and foster homes for animals with special needs.

Since she took the job, Trice works an average of about 10 hours a day, six days a week. One of those days she’s a volunteer. Her ideas for running the shelter in a new way come from years of experience through running her own shelter in Georgia in the early 1990s and creating the Hand Foundation, an organization created in 1996 aimed at transporting animals from overcrowded shelters to ones with a demand for pets.

Several articles have been written about Trice and her work. Trice said the awareness has been great but said she wanted less spotlight on her past work and more due credit to go to her staff, like Alice Schmett, whom “do the hardest work” and the “heavy lifting.”

Just as Trice said that, Schmett came into the main lobby hefting an extremely pregnant pit bull into “Alice’s Room” to be cared for. 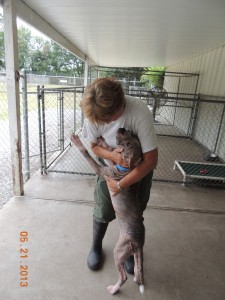 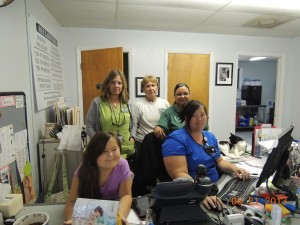