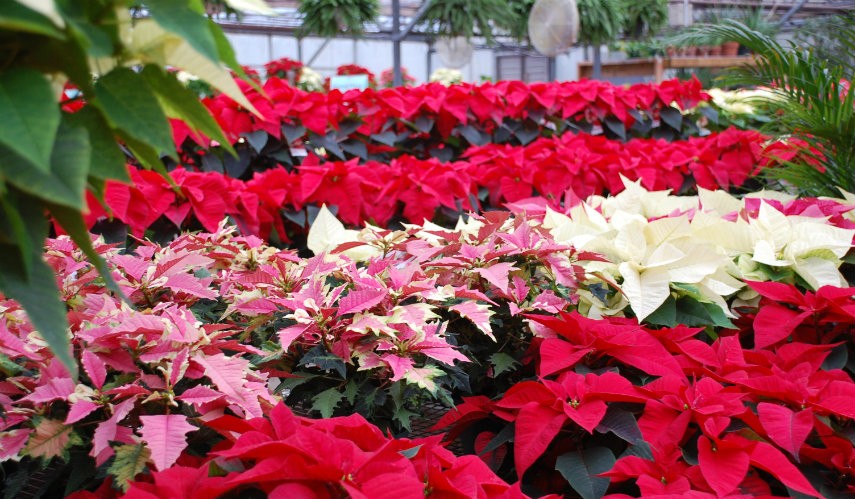 By Cindy Reid | The humble poinsettia plant holds center stage for just a few brief weeks every holiday season, and you can thank a South Carolinian for that. Poinsettias are cheap, easy to find, and come in a variety of colors from vivid red to snowy white. Even blue and purple ones, adorned with sparkly stuff have been popping up the last few years. From mantles to dining tables, church alters to office cubicles; they are everywhere this time of year.

But did you know that without Charleston native Joel Roberts Poinsett we may never have this festive plant as part of our holiday traditions? 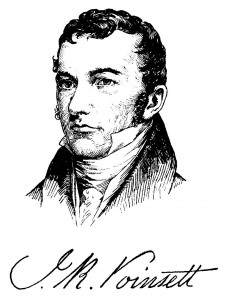 The poinsettia first found its way to the United States because of Joel Roberts Poinsett (1779 – 1851).  Born in Charleston, Poinsett had a long and distinguished political career which included serving as an SC state representative, a special envoy to Mexico from 1822 to 1823 and being appointed the first American minister to Mexico in 1825, as well as servins as US Secretary of War under President Martin Van Buren.

In Mexico he was able to practice his love of botany and while touring Taxco Del Alarcon, south of Mexico City, he was very taken with a small shrub with bright red leaves growing wild.

Poinsett immediately sent some of the plants back to Greenville, South Carolina, where upon his return to the United States he began propagating the plants and sending them to friends and botanical gardens. Bartram’s Garden first introduced the plant to the commercial trade at the Pennsylvania Horticultural Society on June 6, 1829. 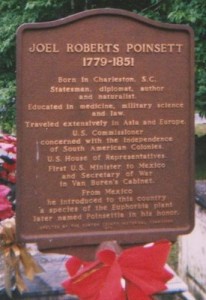 William Prescott, a historian and horticulturist, was asked to give the plant a new name. Having just published a book called the ‘Conquest of Mexico’ in which he detailed Joel Poinsett’s discovery of the plant, Prescott named the plant the poinsettia in his honor. (Side note- Joel Poinsett later co-founded the institution which we know today as the Smithsonian Institution.)

Mexican legend has it that a poor girl was inspired by an angel to gather weeds from the roadside and place them in front of the church altar at Christmas. The weeds grew red “flowers” and became beautiful poinsettias. From the 17th century, Franciscan friars in Mexico included the plants in their Christmas celebrations. The star-shaped leaf pattern is said to symbolize the Star of Bethlehem.

The Ecke family of California is widely credited with popularizing the plant for the holidays and at one time they produced 70 percent of all poinsettias grown in the world.

The poinsettia really is a shrub or small tree, bearing dark green leaves. The bracts, most often red, are often mistaken for petals, but they are actually leaves. The colors of the bracts require darkness (12 hours at a time for at least 5 days) in a row to change color. At the same time, the plants require abundant light during the day for the brightest color. (Thank you Wikipedia) Though they have a bad rap, poinsettia plants are only mildly toxic to cats and dogs. Far more worrisome are lilies, holly or mistletoe. From www.petpoisonhelpline.com.

December 12th was set aside as National Poinsettia Day by an Act of Congress. The date marks the death of Joel Roberts Poinsett. In honor of our South Carolinian heritage give someone you love a poinsettia today!