The six stations are located at strategic locations on the Trail at the Depot Building; the trestle behind Technology College of the Lowcountry; the benches

between Rogers and Broome Lane; the benches between Brotherhood and Riverside; and at the Westvine Trailhead.

“For years, the Rotary Club of the Lowcountry has been involved in Adopt-A-Highway and when asked to get involved in the Spanish Moss Trail we didn’t hesitate,” said Gonzalez. “We have adopted the trail area between Riverside and Brotherhood and pick up the trash at least once a week for that portion of the Trail. So when the Friends of the Spanish Moss Trail approached us to help secure these pet-waste stations, we invited the Beaufort Rotary Club and Sea Island Rotary Club to work together for this important project in community.”

Over the two days of installing the pet-waste stations, Gonzalez said they had about 25 different Rotary members along with their children and spouses pitch in along the Trail. The cost of these six Trail pet-waste stations was $1,300. The Rotary Clubs also purchased 6,000 extra replacement bags and a sign attached to each station indicating they were provided by the three local Rotary Clubs.

If you or your business is interested in information about sponsoring additional pet-waste stations or supporting other amenities for the Spanish Moss Trail, send an email to info@spanishmosstrail.com.

Stay up to date with all the news, photos and information on Beaufort’s Spanish Moss Trail here. 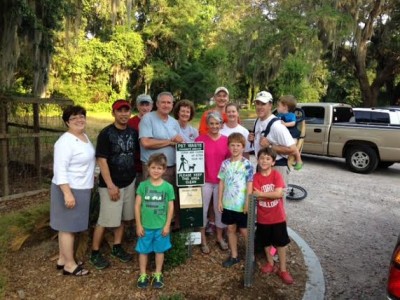