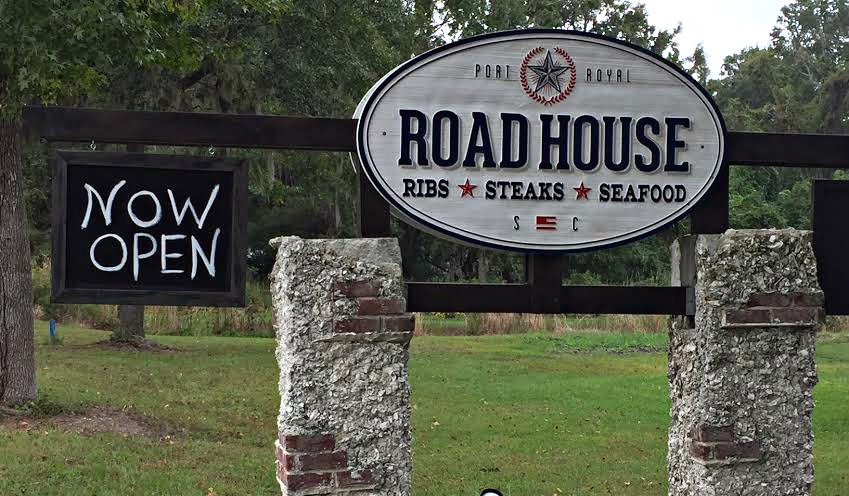 Beaufort got a lot tastier this week after the new family-owned Roadhouse Ribs opened its doors off of Savannah Highway in Port Royal. With a very creative menu, a classy decor and lots of extras, the new spot will be sure to up the ante in the area’s BBQ options.

The restaurant is the idea of father and son owners Earl and Alex Nightingale, who opened Ela’s Blu Water Grille in Shelter Cove on Hilton Head some six years ago and The Pearl Kitchen and Bar, which opened about a year and a half ago on Calhoun Street over in Bluffton.

Roadhouse Ribs offers a variety of BBQ staples including smoked brisket, pulled pork, smoked chicken and of course ribs with five different bbq sauces to choose from; as well as hand-cut grass-fed organic steaks, seafood and prime rib. All of their meats are slow-smoked in an oak and pecan wood-filled smoker.

The kitchen showcases a variety of BBQ that touches on southern cultures including South Carolina’s mustard base, Texas’s sweet style, Tennessee’s famous dry rub, etc., and they put them all in one place.

The menu also favors lunch with a variety of burgers and sandwiches available and a list of appetizers and side orders that reads quite well with brisket nachos, sweet potato fries, cider slaw, a variety of sliders, fried pickles and more.

What caught our attention most, other than the wall-sized wine racks and stylish full service bar, was the creativity behind the mac n cheese.

Roadhouse offers a shrimp & sausage mac n cheese, and we all know how well shrimp and sausage go together; a pork & green chili mac, bacon and jalapeno and a recipe called ‘burnt end mac’ which consists of brisket, tomatoes, and a thick & sweet bbq sauce.

Check out the new spot at 7 Toppers Lane off of Savannah Highway near the Broad River Bridge and see them on Facebook here.