For the second year in a row, the Parris Island Marine Band is scheduled to perform a mix of patriotic to popular music at the Sand’s Beach in Port Royal, S.C., at 7:30 p.m. on July 4, 2014, in order to celebrate Independence Day with the local community.

Following the band’s free performance, a fireworks display, presented by the town of Port Royal and the Historic Port Royal Foundation, will start at approximately 9 p.m. The town’s festivities begin at 5 p.m.

Parris Island will not hold its own fireworks display again this year. In 2013, Parris Island opted not to hold any 4th of July events in order to minimize the fiscal impact on vital programs affected by sequestration. This year’s decision was made not only to save money, but also as a fitting way for Parris Island to share the holiday with its neighbors.

“Having the Parris Island band is the highlight of our annual Fourth celebration. The fireworks are good and the food and drink good, but folks now anticipate bringing their chairs and enjoying the patriotic songs that are the prelude to the fireworks,” said Joe Lee, Port Royal town council member. “The Town of Port Royal is honored to have the presence of our Marines at this special event.”

The Parris Island Marine Band’s primary mission is to provide musical support for recruit graduations and other military ceremonies and events. In addition to playing at approximately 40 recruit graduations each year, the band also performs in community events across the United States and locally.

For more information on the band, visit http://www.mcrdpi.marines.mil/Units/ParrisIslandMarineBand.aspx 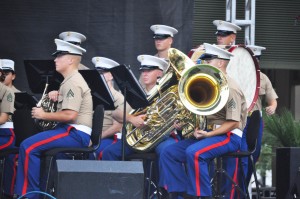