By Shannon Roberts | Race director Tim Price is ready this year.  Master Naturalist and organizer of running races on Fripp Island, Tim and his enthusiastic crew of Activity Center employees and interns are prepared for a crowd this year at the Fripp Island Independence Day 5k, which will be held this Thursday, July 3rd.

This race has increased its numbers from 50 or 60 runners the first year to over 260 runners last year, where the throngs of red, white and blue-clad runners and walkers caught the race organizers by surprise.  Tim anticipates well over 300 people to hit the pavement in this year’s Independence Run.  He has partnered with Rob Fyfe at local run shop Palmetto Running Company to lend their expertise and computerized timing system to race day.  The route will be a well-marked out-and-back course, taking runners from the Beach Club, along Dolphin Road out to just past Ocean Point where aid station volunteers will be turning the runners around with a cup of water.

Tim has worked as a naturalist on Fripp Island since 2011.  An avid runner, Tim is no stranger to running events and has 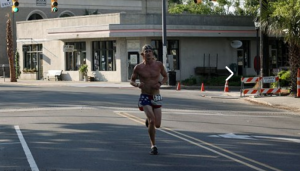 brought that passion to the menu of activities offered by Fripp Island Resort.

Oh, and the term “avid runner” is an understatement:  Just last year, Tim participated in five marathons, two 50ks, one of which he won, three half-marathons, the Tampa Bay Gasparilla Distance Classic (running over 30 miles in 2 days) where he finished 3rd overall, and countless 5ks.

He’s a familiar face to those who run 5k races in Beaufort; usually being the one finishing first and cheering the rest of the field at the finish line.  He has run the Boston Marathon for three years, and he ran a 2:44:43 at the Wrightsville Beach Marathon, good enough for sixth place overall.

That is a 6:18 mile by the way, for those of you getting out your pace calculators.

Tim is also no stranger to Fripp Island.  He lives and works on the island, as well as doing almost all of his training on Fripp, only venturing off occasionally to run the trails on neighboring Hunting Island.  Tim has been developing the athletic and wellness activities for the island through the Activity Center, holding race events on almost all the big weekends.  This year, he is planning races for Labor Day, Fripp Fest (second week in October), Thanksgiving, Easter, and Memorial Day.

“The races have become so popular on the island that Fripp Island Resort has encouraged me to do as many as we can.  I have always believed Fripp is a fantastic place to run, and I’m glad I get the opportunity to showcase that.” Tim explains.

He also wants to design a variety of races in addition to the traditional 5K distance. “I have been charged with taking a more active role in developing wellness and athletics on Fripp Island. We are looking into longer distances, possibly a half-marathon, triathlon, or a race series. We get alot of positive feedback every time we host a race, and I think it is great way to experience the natural beauty of our island.”

Tim is also looking into adding other fitness opportunities, such as beach yoga and regular group runs.

The Fripp Island Independence Day 5k is one of many events being held on Fripp Island for the Fourth of July week festivities. Because of the number of participants who have registered, this race is open to Fripp Island Resort Guests, property owners, or owners’ guests only. Races offered throughout the rest of the year, however, will be open to the public. Registered runners will be given a pass at the gate to come to Fripp to participate in the race.

In addition to the races being held by the Fripp Island Resort, the next upcoming race on Fripp Island is the 7th Annual Turtle Crawl, a family fun event benefiting the Fripp Island Turtle Team, a non-profit volunteer nest protection program permitted by the SCDNR and dedicated to the 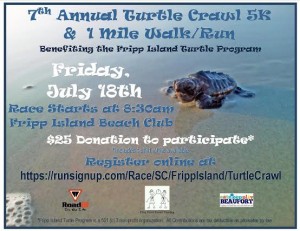 conservation of sea turtles and educating the public about this amazing species. The Turtle Crawl offers a 5k run and a 1 mile fun run/walk.

So, all y’all who are lucky enough to be on Fripp Island this week, come out to run or walk the fun and festive Fripp Island Independence Day 5k. Dig up all your moisture-wicking Americana gear and gather your families to come celebrate American freedom with a run. And don’t forget the sunscreen! 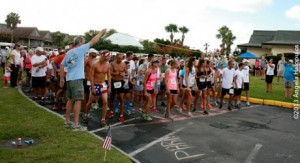