Kids discover treasure at The Sands

By Ashley Hamm | A long-standing local tradition for kids is the hunt for sharks teeth at The Sands in Port Royal. But, successful hunts can sometimes be few and far between. Local Mike Harris, affectionately known as the ‘Shark Tooth Fairy’, knows the thrill of the hunt all too well as he fondly remembers searching for shark teeth and fossils as a child. He started diving for them last year, and when he found his first Megalodon tooth, “it blew my mind, and I knew I had to share it,” he said.

And share he did! Hundreds of kids of all ages enjoyed combing The Sands beach in Port Royal, uncovering over 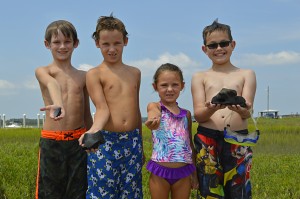 300 pounds of shark teeth and fossils. Fossil hunters from around the world donated to Harris’s event and the megalodon teeth were all Mike Harris-finds. Harris took his time hiding them all over the place before the throng of some 300 people arrived. Then…kids wore proud smiles as they found dugong ribs, whale bones, crinoids and megalodon teeth, among others.

Often fickle this time of year, the Lowcountry weather seemed to welcome the gathering as the Port Royal sun shone down on the crowd. The salt air was seasoned with the scent of suntan lotion as the cool breeze gave some relief to the heat and humidity we have come to expect at the end of June.

The Shark Tooth Fairy is truly all about the kids and was excited to put on such a fun event. Harris is a firm believer in the importance of a child’s discovery of the outdoors. He says, “The only reason that kids are wasting so much time playing video games is because nobody has introduced them to fossil hunting and other outdoor fun.” 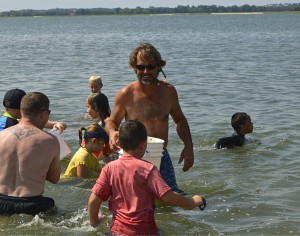 Not only was the shark and fossil hunt a great way to enjoy the weather and to make new friends, it was educational too; offering kids a tangible example of how life on earth has evolved over the millennia.

Countless kids had their pictures taken with the ‘Shark Tooth Fairy’, and his smile undeniably shows how happy their discoveries make him. “My collection of pictures of happy kids finding their first fossils is more important to me than my own shark tooth collection.” Harris said.

This was the last hunt of the year, as the water visibility is getting worse, making it increasingly difficult to find more shark teeth and fossils SCUBA diving. But, don’t worry – Harris is already planning another hunt for next winter.

That’s OK. Saturday’s was one to remember for awhile. 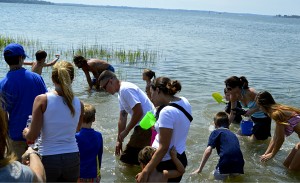 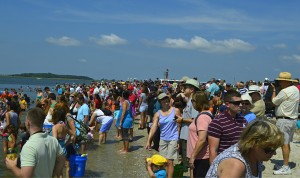